I've had my eye on Carrara for some time now, but never had any incentive to move away from Bryce, a lower-end product that is currently made by the same company. Bryce may be lower-end, but it has landscape-creation tools that are simply unrivaled. Since that's always been my primary focus with my 3D art, it was the natural choice.

However, in the most recent version of Carrara, they've added a lot of features that let artists do some spectacular effects that simply aren't possible in Bryce, or else are very, very, hard. If you want to know what I mean, see below. Not a single one of these images could have been rendered easily in Bryce.

That said, I'll still be using Bryce for years to come, I'm sure. Certain effects, particularly the ones that are more surreal, just can't be duplicated in Carrara. But when I need advanced effects or ultra-realism or fine control, Carrara is definitely going to be my tool of choice from now on.

If you're interested in checking out Carrara for yourself, there's a 30-day trial of the old version 5 here, and they're running a special on the express version of the new version 6 here. If you join DAZ's platinum club, you can get Carrara Express for only $20 through the end of October. 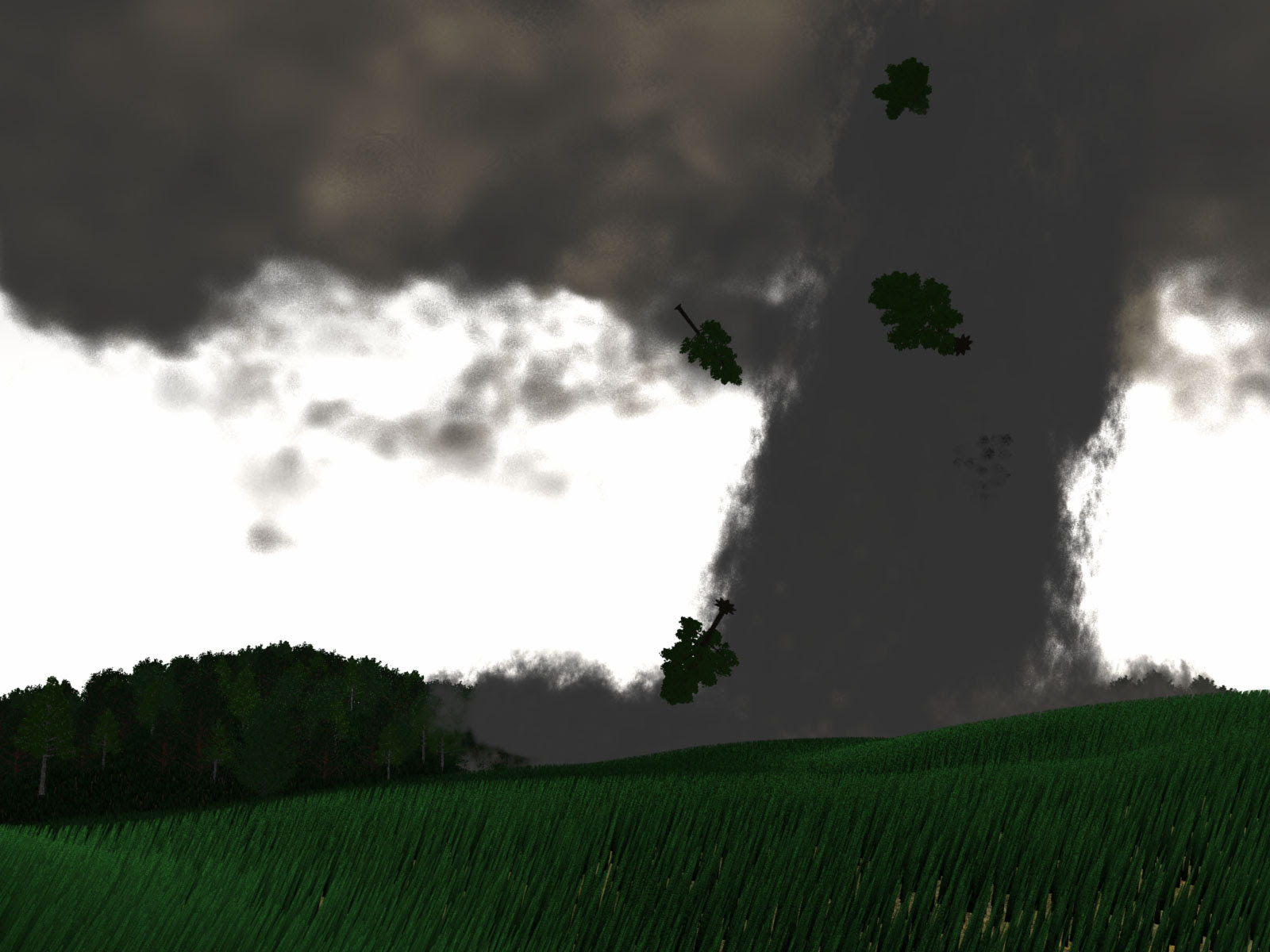 This was my second rendering in Carrara. There were a number of advanced effects in this program that I knew I just had to put to use, and a tornado seemed like the perfect outlet (I'm absolutely fascinated by tornadoes -- they've featured in my nightmares since I was a kid, and those were always some of my favorite dreams, though they are quite intense).

Of particular note is (obviously) the tornado itself, the dust around its base, the thickets of trees on the left and right of the screen, and the field of grass. None of those were effects that I've ever been able to accomplish with Bryce. It was this sort of thing, more than anything else, that led me to purchase Carrara.

This scene took me an unusually long amount of time to put together, because of all the complex elements, but I'm particularly pleased wit it. Seeing the tornado like that gives me chills, so I know I did it right. 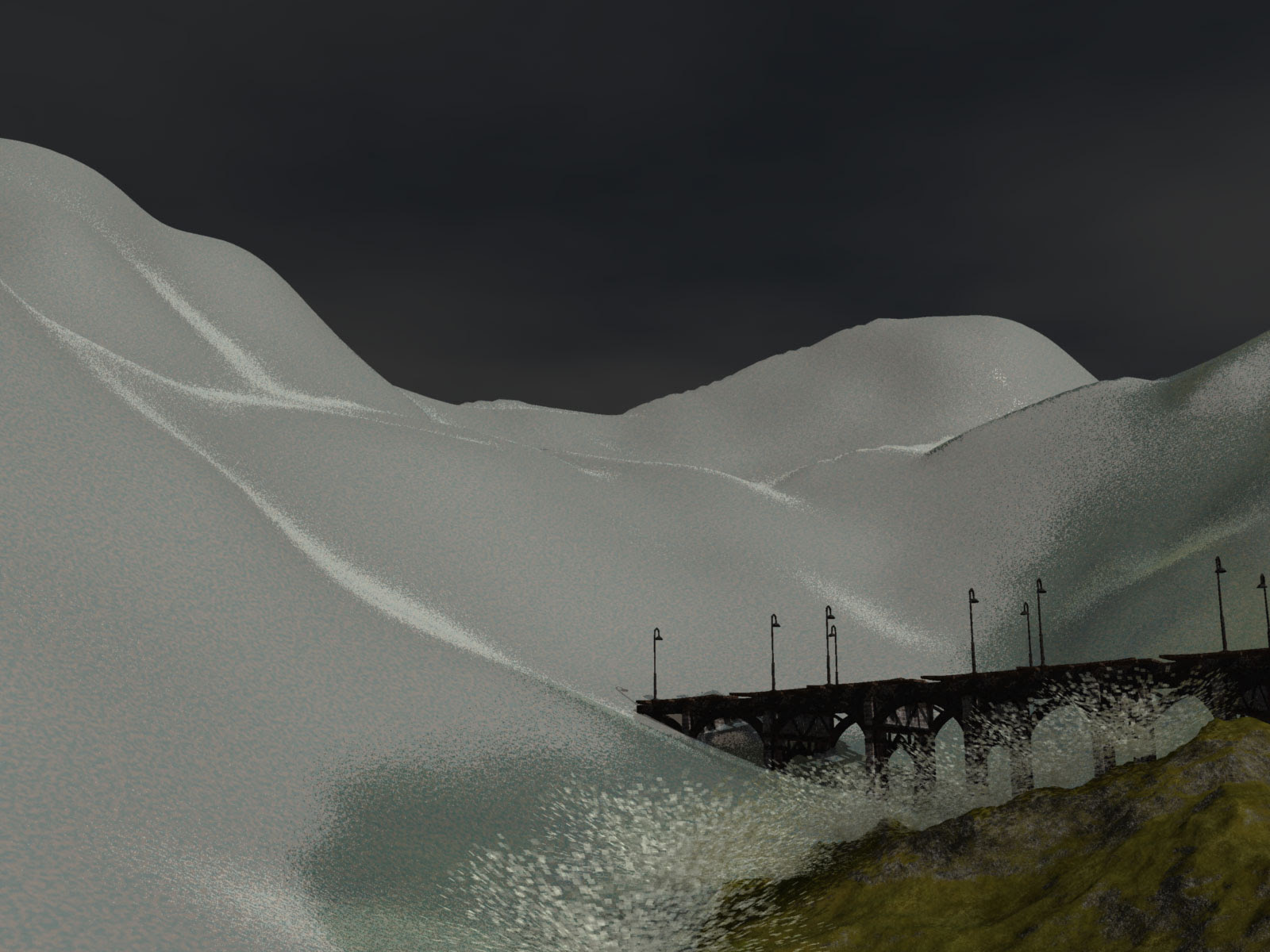 This rendering is another product of my nightmares (which, as I noted before, are intense, but in some ways enjoyable). Tornadoes are the biggest star in my nightmares, but tidal waves are definitely number two. In my dreams, the waves are often as massive as this -- not sure if that's realistic for most tsunamis, but I don't care. Often I'm on a pier or bridge like this when they hit, and I'm left scrambling up steep banks or buildings or something as the wave destroys everything below. There are usually loads of people around right before the wave comes, but as soon as the tide sucks out (as happens before a wave hits, I'm told) I find myself completely alone. Somehow, it seems more intimidating that way. This scene would be my perspective in one of the dreams in which I don't make it away in time, and am sucked out to sea. Usually I make it away, though. 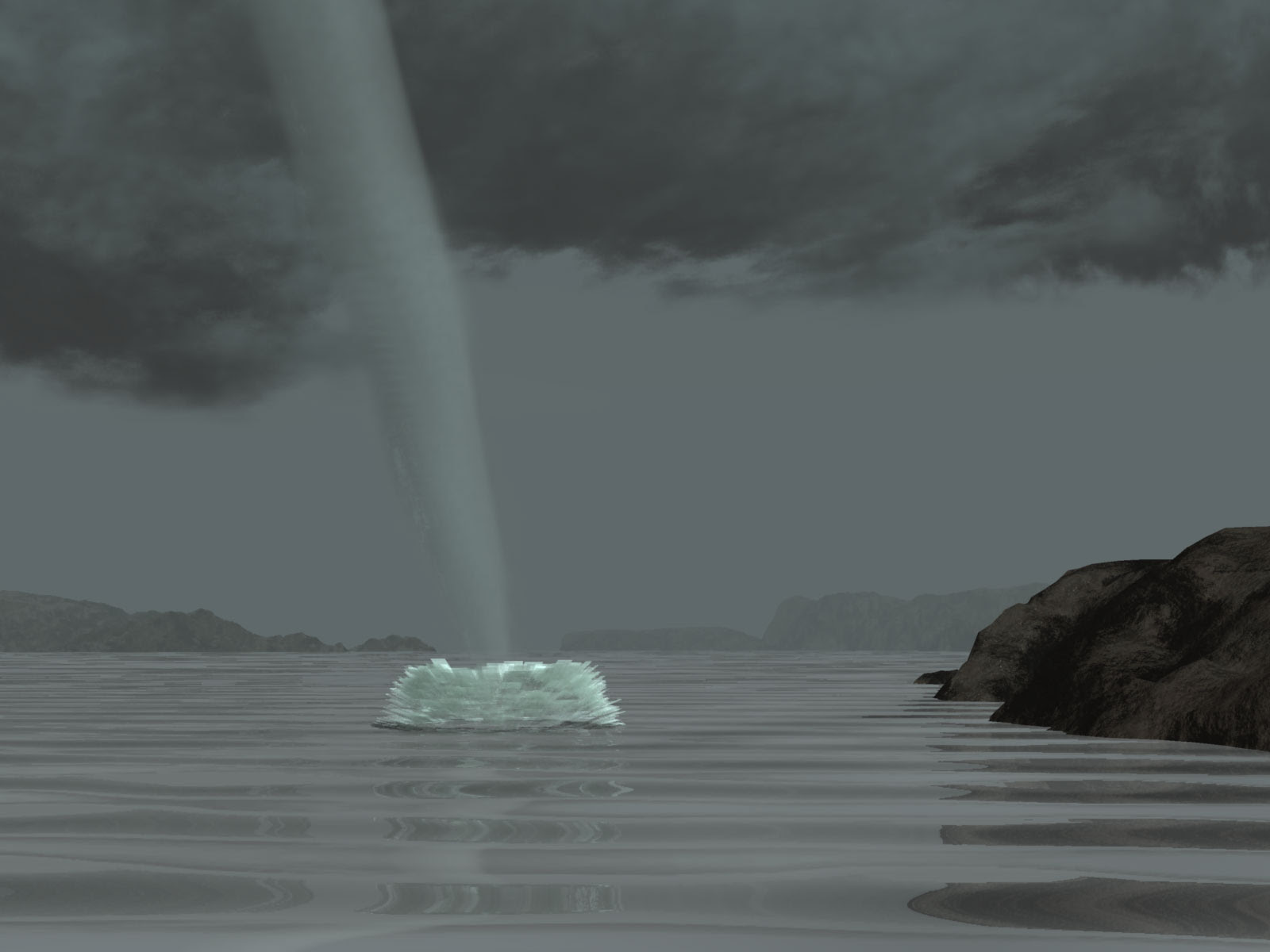 Once I did my first tornado in Carrara, I knew I had to try for another kind of tornado. In some ways, this tornado was much harder to design than the first, but I think it came out pretty well. I also did a lot of experimenting with water in this image. The spray effect around the tornado's base isn't as realistic as I would like, but it was my first try with particle effects like that. Again, something that is well beyond the reach of Bryce. 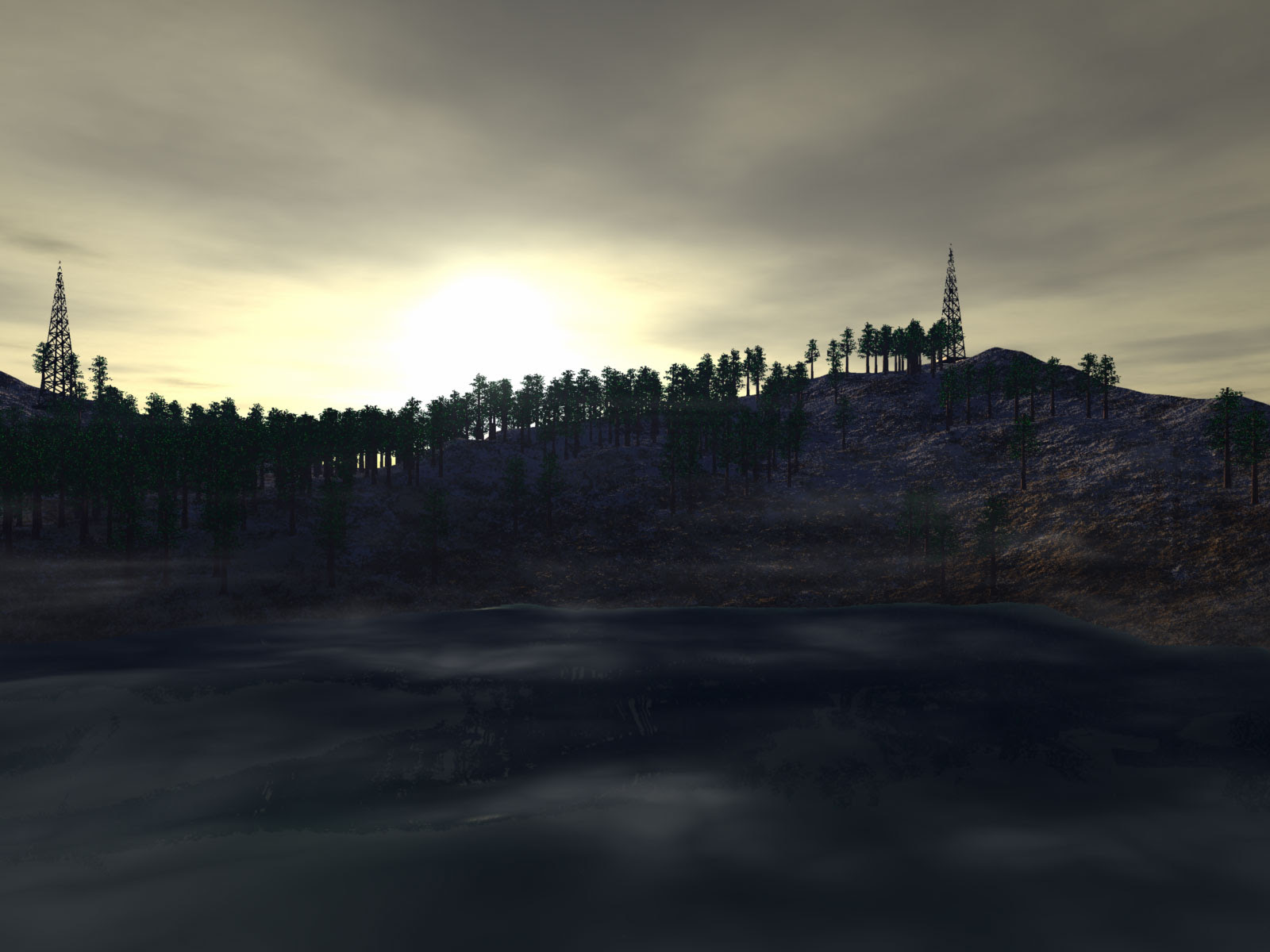 This was my first image in Carrara. I was mostly just playing around with the atmosphere, the water, the fog, the terrain shading, and the surface replicator tool (used for the forest). However, the end effect was pretty decent, so I decided to save it.
Posted by Christopher M. Park at 11:08 PM

Email ThisBlogThis!Share to TwitterShare to FacebookShare to Pinterest
: Graphic Design, My Art

By the way, those waves that hit the pier in your dreams and send you scrambling up steep banks are a metaphor for the hoards of fans you'll have when your book is published.

Christopher, I really love your art. It's amazing that it is all computer animation. Can I use Countryside Tornado next week for a writing exercise? I'd like to post it on Monday or Wednesday. And if that is ok, then do I just cut and paste the picture from your site? Thanks for putting your art out there. And of course I will link back to you.

Ello,
Thank you very much! And, of course you can use it for your writing exercise. Blogger will want you to upload the file onto your blog, which means you have to download it first, I think. You're welcome to link to it on my site, if you know how (the url is http://www.christophermpark.com/gallery/gal/11th_Power/Countryside_Tornado.jpg), but it might be easiest to just right-click the image on my blog and save it to your computer, so that you can then upload it using blogger's image insert tool. Whatever works best for you is fine with me.

Thanks for taking such an interest, and for the link!

Great I will do that and put it up probably MOnday!

I posted it! Thanks so much.

Thanks for letting me know! Glad you enjoyed it, and thanks for the link!

i think the water is good but it would probably be bigger and the water around it is peaceful which makes it look faker ... but not bad