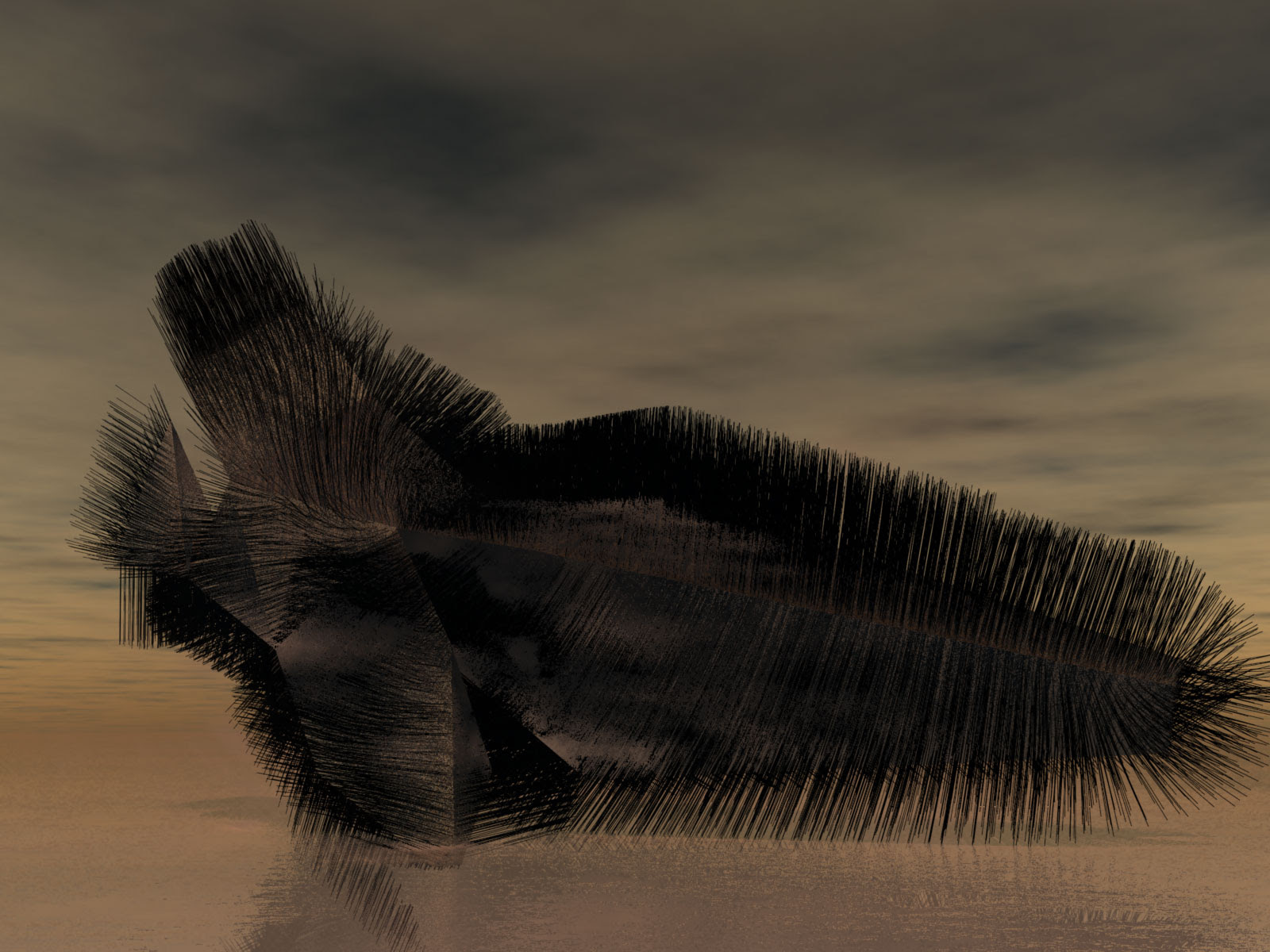 One of my stranger renderings of late, it's also one of my favorites. I wasn't really sure what I was going to create when I started with a blank slate in Hexagon, but the underlying structure of this model was what emerged. I thought it would make a good base for a translucent crystal of some sort, but when I started working with it in Carrara I quickly decided to go with something darker, opaque, and reflective.

The hair was the stroke of inspiration that tied this all together for me -- the weather, the water, and the patchy mist clinging to the ship all serve to refine and emphasize this one aspect of the scene.

I've never really thought about this before, but this world really is filling up with clocks. Doing a quick mental inventory of the clocks in my house, I come up with:

That's 25 clocks right there, and I know I missed a good number of them. I also only counted those clocks that have some sort of visible display, whether on a monitor/screen readout or whatever. I'm sure various other electronics have some sort of internal clock of which I'm not even aware.

This is a pretty random thing to quantify, on the surface -- but on the other hand, it seems pretty descriptive of our society that we are perhaps more surrounded by timepieces than any other civilization on Earth has ever been.
Posted by Christopher M. Park at 7:38 AM 2 comments:

Email ThisBlogThis!Share to TwitterShare to FacebookShare to Pinterest
: Off Topic

I recently wrote my first article for Code Project. It's on a pretty niche programming topic, specifically controlling the actuators in game controllers via C#. This is something that should be a pretty basic topic, but a longstanding bug in some Microsoft libraries prevent their examples from working with many game pads. My article outlines the basics of how to do that sort of code, and shows how to work around their bug.
Posted by Christopher M. Park at 11:29 PM No comments:

Email ThisBlogThis!Share to TwitterShare to FacebookShare to Pinterest
: Games, My Writing, Programming 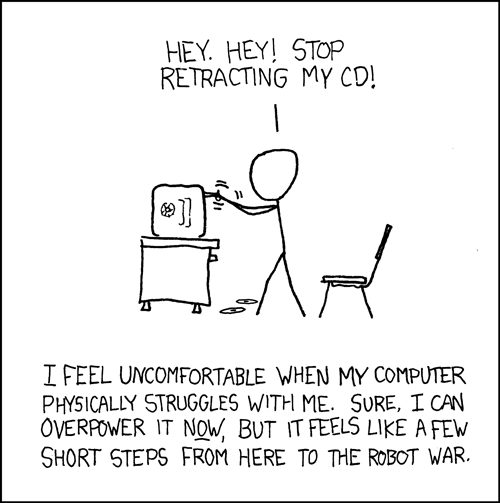 I recently discovered an online comic called xkcd, and I must say it is hilarious. A lot of the jokes are things that would only be funny to programmers, but I think anyone can appreciate this one. I enjoyed many others from that strip about turing tests, sysfaults, compiling, imaginary kilobyte denotations, and many other topics, but I doubt you'd be as interested in those if you're part of my normal readership (aka, other writers).
Posted by Christopher M. Park at 11:21 PM 4 comments:

Email ThisBlogThis!Share to TwitterShare to FacebookShare to Pinterest
: Humor, Programming 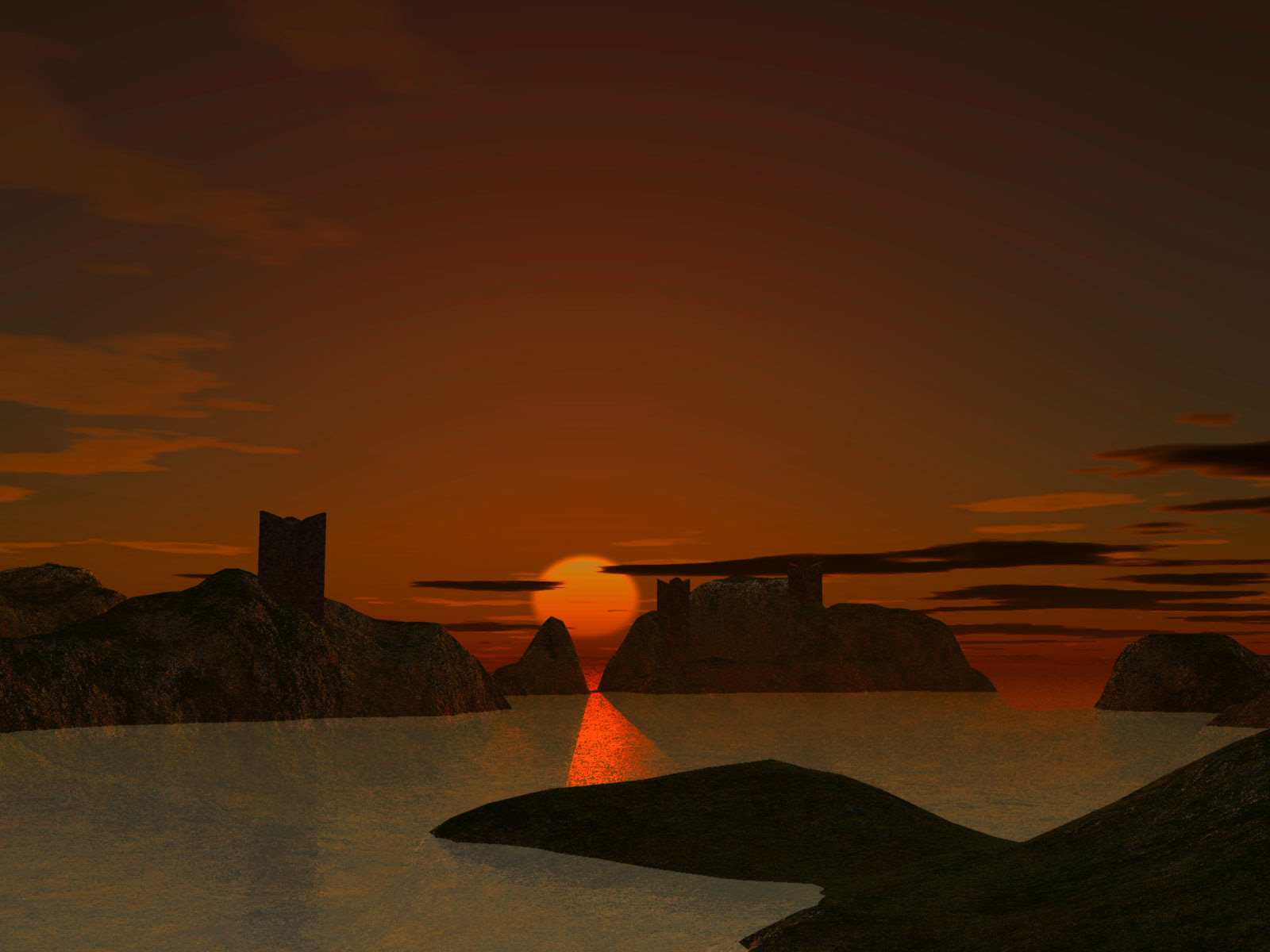 Another Carrara sunset, this time I was playing with light to see how dramatic I could make the effect. The result was quite pleasing, though I did have to massage the colors and contrast a bit in Photoshop to get the final effect.

The tower model was a freebie from Turbo Squid.
Posted by Christopher M. Park at 10:21 PM No comments:

Whenever my family gets together, we generally play games. Xactica, Turn the Tide, Five Crowns, Phase 10, and Coloretto are long-time favorites of the Card variety (though we also enjoy others such as Descent, Settlers of Catan, Princes of Florence, among dozens of others). Anyway, the point being that we have a very wide variety of games we play.

Recently, we've added Three Dragon Ante to the mix. It's a fun, semi-strategic, card game under the Dungeons & Dragons license. I've never played D&D much, though I have played some of the computer spin offs such as Unlimited Adventures and Neverwinter Nights. I have a reasonably thorough understanding of most D&D mechanics, though I've never been wholly invested in the property.

Imagine my surprise, then, to discover the names of two particular cards in Three Dragon Ante: Bahamut and Tiamat, the two dragon gods. These were names I had given to two of my seven Elder Dragons in THE GUARDIAN (which are also the only dragons in my series -- and there are no elves, dwarves or fairies/faeries, I swear).

I hadn't realized that these two names were used together in D&D, or I never would have chosen them to use in my own work (I picked them for their mythological significance). Fortunately it was something I caught on my own, well before the work was even sold -- how much more embarrassing would it have been to stand accused of plagiarism years later? At that stage of the game, it would have been very hard to convince anyone that the choice of name was unintentional. I hear the same sort of thing happened to Katherine Paterson with Bridge to Terebithia. I've been sympathetic to her on that issue since I first heard of it, but now I can really relate.

From now on I'll be googling every name I use if it seems at all familiar. A lot of the names I use have their roots in various world mythologies or classic works, but using names from modern writers/works isn't the same thing. I've renamed Bahamut and Tiamat to Deinderak and Tiarak, which are definitely unique. The characters were already quite unlike their (unintentional) counterparts in the D&D universe, so at least their monikers were all I had to change.

Writing a novel is an interesting endeavor in that you are simultaneously inspired by others' works and setting out to do something wholly original. The more original the better, of course, but there's no way to be original unless you know what else is out there (and, come on, good writers enjoy reading for pleasure, anyway). Sometimes a little too much of some other writer's influence sneaks into our works, and we have to guard against that. Even without the issue of plagiarism, reusing characters, names, ideas, or phrases from other works isn't going to make your own writing stand out. Where would we be if writers weren't out there inventing words like "hobbit" and "muggle" and "jedi?"
Posted by Christopher M. Park at 11:24 AM No comments:

Email ThisBlogThis!Share to TwitterShare to FacebookShare to Pinterest
: Games, Thoughts on Writing

Via Slashdot, I found an interesting article called Why Apple fans hate tech reporters. The basic premise is that when people are really rabid about an idea -- the merits of a certain product, religion, or political stance -- they perceive even-handedness as an insult. In other words, if I think you're completely wrong/evil/whatever, and someone else comes along and doesn't immediately leap to my side, I'll feel like they're siding with you.

Interesting. Disturbing. This is apparently just part of human nature, because I've certainly seen it before in life, though I'd never thought much about it until WSJ columnist Walt Mossberg pointed it out. It's particularly troubling for me, because I tend to avoid political conflict by remaining neutral. Go ahead, ask me what I think about abortion or Israel or Global Warming -- I'm not going to debate those things with anybody, at least not at present.

There are many conflicts in the world, a great many of which affect me, but I am not enough of an expert on them to feel like I can take a meaningful stance. On those issues with which I do have first-hand experience (the need for helmets on bicyclists, issues with violence in schools) I'll definitely speak out. I know it's more popular for people to have ardent opinions on anything and everything, but that's never sat well with me. I've always been a moderate, only taking one side or the other when I feel particularly informed or knowledgeable about the issue.

And now I discover that even moderation is likely to drag me into ideological scuffles I want no part of. How the heck does Switzerland do it? Oh, well, life wouldn't be interesting without conflict.
Posted by Christopher M. Park at 10:03 PM No comments: