So, you may remember that we're currently working on a project called Shattered Haven: 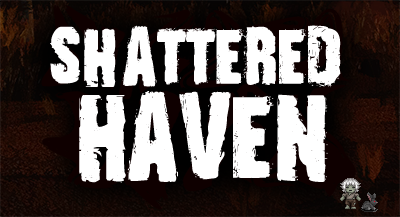 Heavy Cat Studios, who are also doing the art revamp for A Valley Without Wind, have been hard at work on the graphics for Shattered Haven as well.  The two games have a very different in-game style, as SH is a more retro pixelart style whereas AVWW is more of a painted/drawn modern style.  I'm extremely fond of both styles.

However, for the main menu of Shattered Haven, we're doing a more modern painted/drawn style as well to set the mood.  This is how it's turned out thus far (you can click it to enlarge): 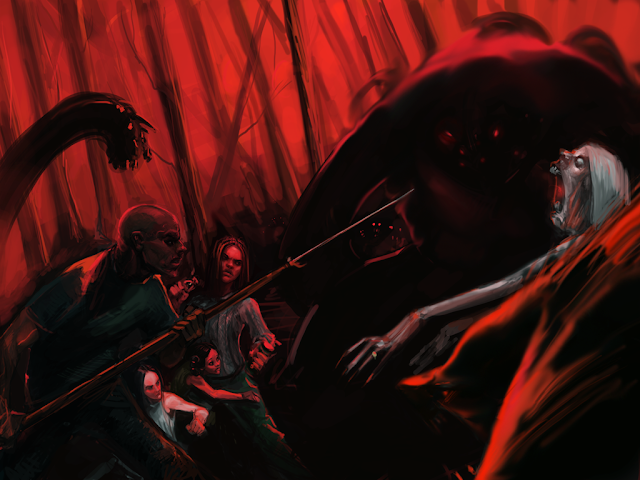 There's a lot of cool elements going on in that image.  For one, you have the parents -- Darrell and Mary -- protecting the kids on the left side of the screen.  Lela is clinging to her mom, and Pierce (who is slightly older) is also sheltering a bit.

You can see some of the grays looking out from the forest on the right, and a very large monster obviously closer up on the right.  On the left, behind the family, you've got a squid-like monster with razor hooks at the end of its tentacle.  Perhaps most significantly, on the right you've got a specific gray that we half-jokingly have internally been referring to as "zombie mom," although that's not her real name.

You can also see the interesting weapons that the family are using -- Darrell has a pitchfork with the outer two tines broken off, while Mary is holding a grenade in one hand and a bottle of water in the other.  All three are effective weapons against the grays, but for reasons you'll discover in the game, guns and most traditional weapons like swords or knives are not effective.  The bottles of water are actually traps that you lay rather than weapons that you directly throw or swing.

This image turned out so amazing that I'm actually going to be looking to Heavy Cat to do some more panels in this style for the various endings of the game as well as for some other key scenes as the story of the game unfolds.  If you can't tell, I'm a bit giddy as to how well these are turning out!

I know that we've not shown any real screenshots of the actual game itself, but that's because it's been so heavily in progress.  I've been porting the old Alden Ridge game over into the new AVWW engine, and making tons of improvements to the game we now call Shattered Haven as we go.  Plus obviously all the Heavy Cat work on the art is still ongoing.  The old way that the game used to is here: 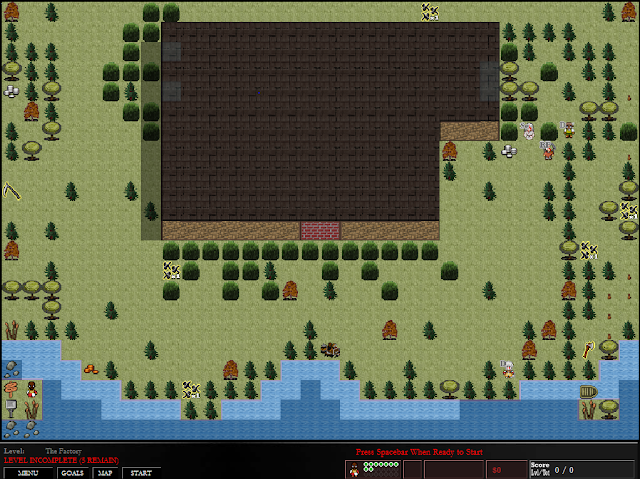 There again, you can click to enlarge if you like.  All of that was either art that I did, or art from free sources.  It doesn't look horrible, but it's not as remotely nice as it could be, either.  There were some screenshots of this on Co-Optimus and Rock Paper Shotgun back in 2010 or so, but they are woefully outdated.

Here's how things are shaping up thus far, although there's still a lot more to do in the coming weeks: 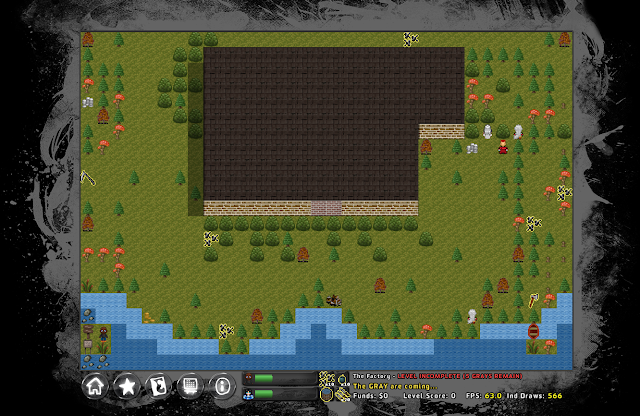 Definitely click that to see the full quality, if you wish.  A lot of the art has been swapped out here, but the enemy grays are still old art, and plus all of the pixellated weapons and traps are outdated, too.  The older game was at a smaller scale, so I had to scale up the images for prototype purposes, and they look pretty rough.  It hardly matters, because by the time the game is really in the hands of players, those will be swapped out.

The water also has not yet been upgraded, but we plan to do something a lot less blocky if we can.  And the roof on the building is also still out of date.  Oh, and the dead brown trees.  All the other trees and bushes shown here, and the bricks, signs, cattails, HUD, and Darrell himself (in the bottom left) have all been updated.

So it's coming along!  We're still 2-4 weeks away from being able to start a public beta (probably closer to 4 weeks), but we're really excited about how it's turning out.  The all-new inventory system in the new version is one of my favorite things, as it makes the game so much more fun to play, heh.

Until next time!
Posted by Christopher M. Park at 10:13 AM

This looks pretty cool. I hope this is going to be on Mac.

Definitely will be on Mac. :)