Forest Fence and Other Renderings

It's only been a few days since my last art post, but right now I'm in an art-creating binge. Also, I recently upgraded my computer to a quad-core, so I'm now able to get a lot more artwork done in the same amount of time (my time just waiting for the renders to complete is drastically reduced by this). Without further ado: 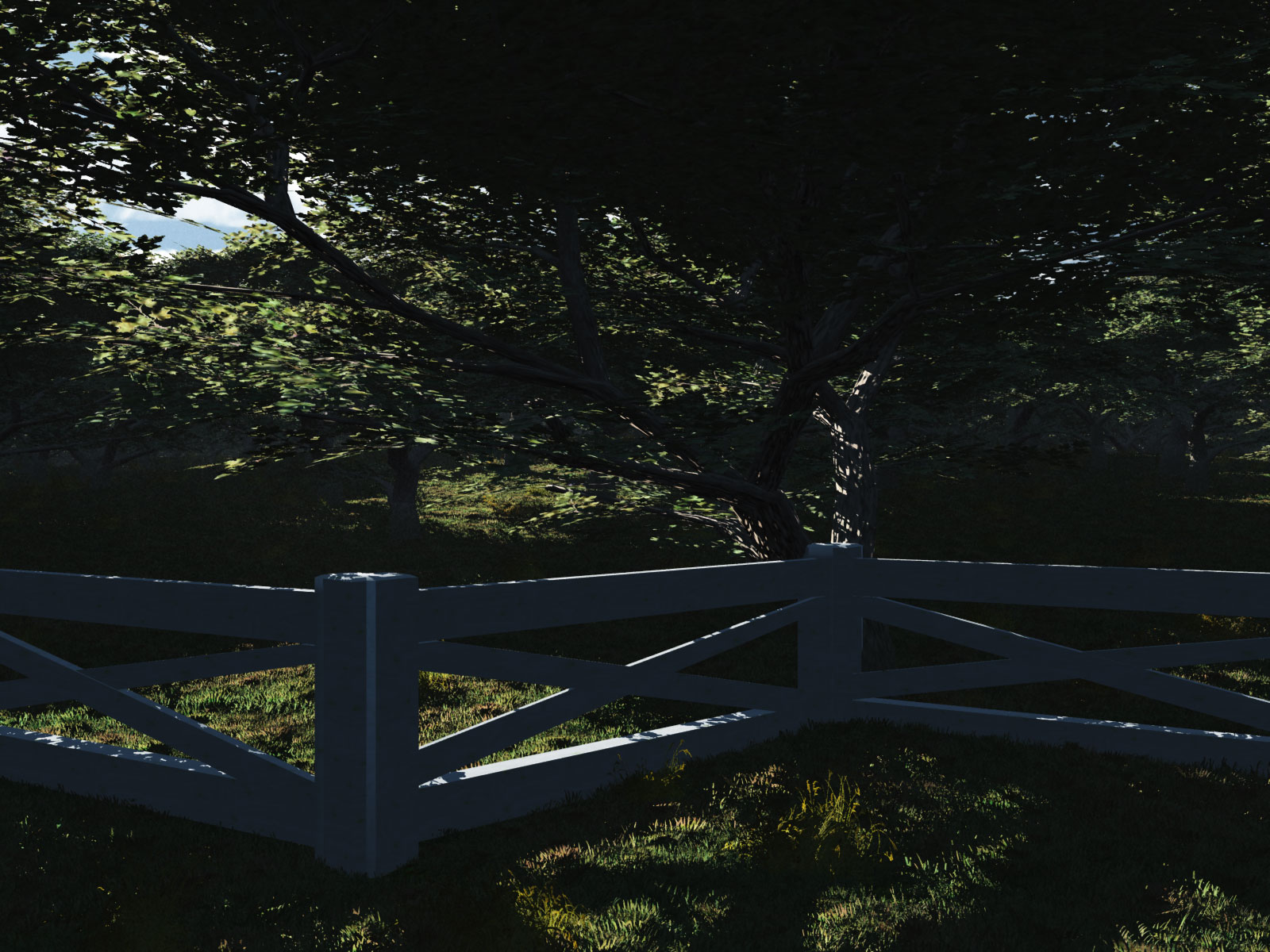 This image is a bit darker than I would have liked, but what can I say, this is the lighting in which it looks the most realistic (I tried several sunnier variants with no luck).

I'm definitely really happy with the overall look of this, though -- if you've been following my renderings for a while, you might remember that I've previously had a lot of trouble trying to get anything approaching a realistic forest scene. I feel that I've finally done it.

I'm also pleased with the quality of the fence, which is something that I modeled from scratch in SketchUp. I think it turned out exceedingly realistic. My wife and I went up to Virginia this past weekend, and I saw some fences like this and knew I wanted to render them. 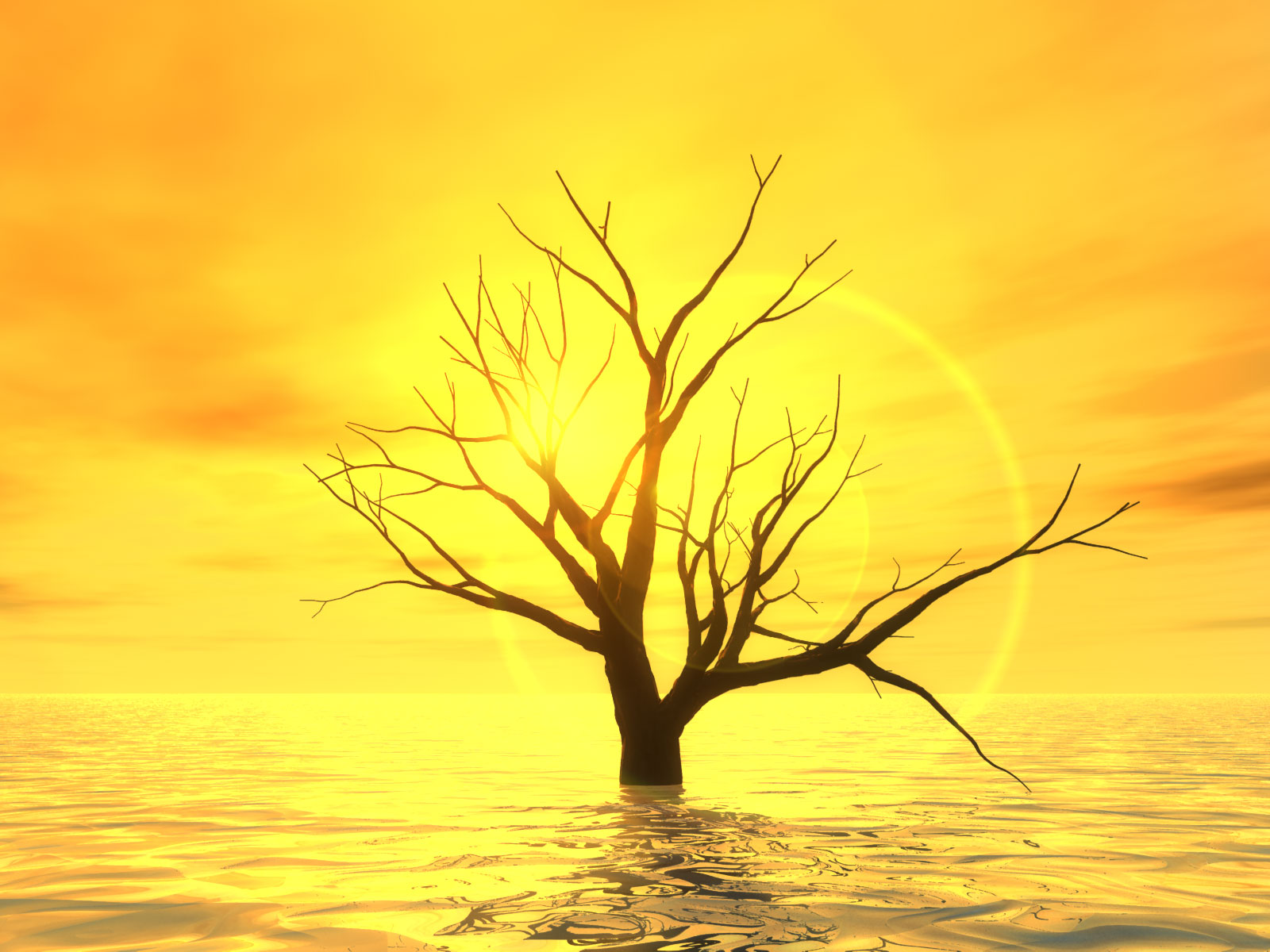 Thanks to an excellent comment by Stephen Parrish, I decided to take another stab at my Loss theme. This is the same image as Loss 3, except that I've completely redone the water (new waves, light flares, two layers of water, displacement mapping, and subsurface scattering). The result is a much more pleasing shadow for the tree (I think), softer waves, and a more vibrant solar reflection in the water.

Another great suggestion by Stephen Parrish, who asked about orthogonal views in the rendering packages I use. While this rendering isn't strictly top-down, it's as close as I wanted to come (a little bit of side-perspective adds more depth).

The fence is the same one I used in Forest Fence, while the houses, tower, and chapel are all free models by the fine folks at Turbo Squid.
Posted by Christopher M. Park at 10:23 PM 3 comments:

This is hilarious. I'd never heard of Improv Everywhere until literary agent Kristin Nelson mentioned them, but this is just the sort of thing I love. It's sort of like Candid Camera, except much larger scale. Another favorite is the Slo-Mo Home Depot stunt -- the reactions of the employees are priceless.
Posted by Christopher M. Park at 9:53 PM No comments:

Email ThisBlogThis!Share to TwitterShare to FacebookShare to Pinterest
: Humor

12 Dreams of Steel and Coal

It's only been a few months since I got Carrara, so I'm surprised to find myself already moving on. Vue is an even better program that recently came into my price range (it's still on sale, if you want to give it a look). This is one of the few rendering packages I've used that has made appearances in commercial special effects (Pirates of the Caribbean 2, most notably).

I'm sure I'll continue to use Carrara some, as I may use Bryce on occasion, but Vue is now the prime tool in my art milieu. All of the pieces from my latest gallery (still in progress) were done in Vue. Here are some of them: 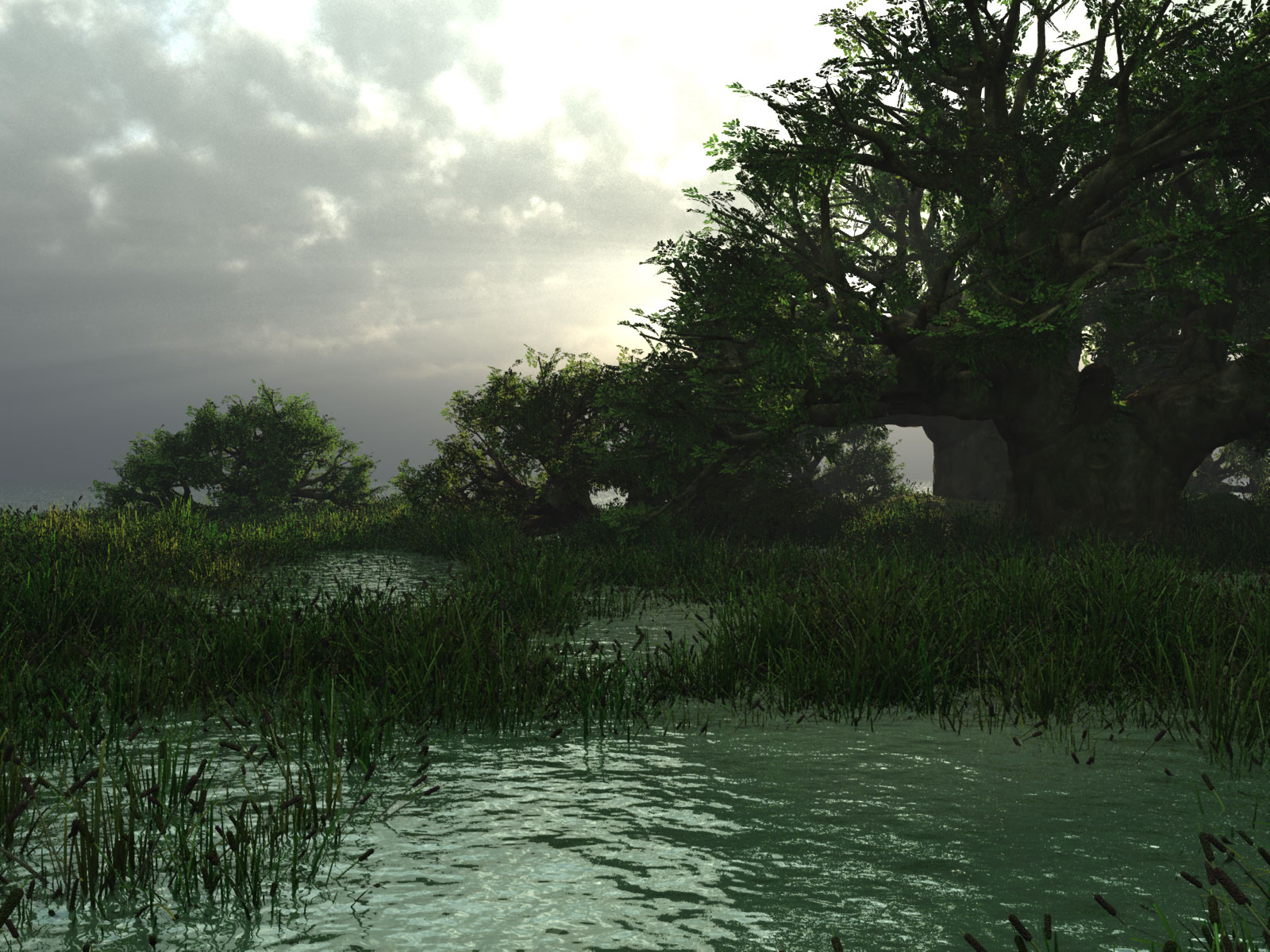 This is an instant favorite for me -- and it's also one of the most realistic renderings I've ever done. I hope to be able to realize this level of fidelity in many more renderings. 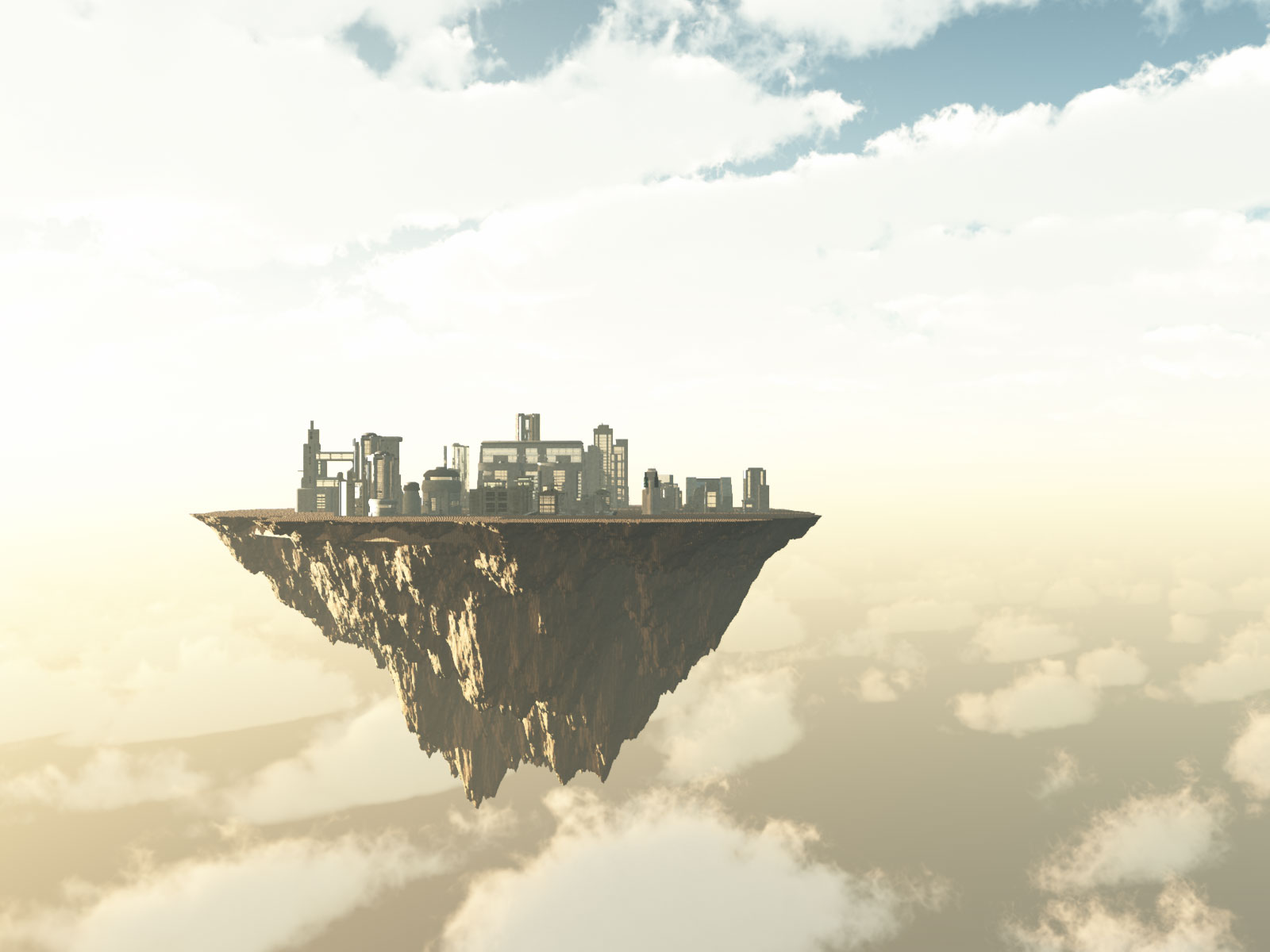 My 300th rendering (not counting those in The Dregs or those that have never seen the light of day at all)! That seems fitting, because this was an instant favorite for me -- its a spiritual successor to one of my earlier works, Sky Castle, which was created nearly ten years before. 300 renderings in 10 years... that's not too shabby for something that is, after all, a hobby.

The building models are not by me, but rather came packaged with Vue 6. 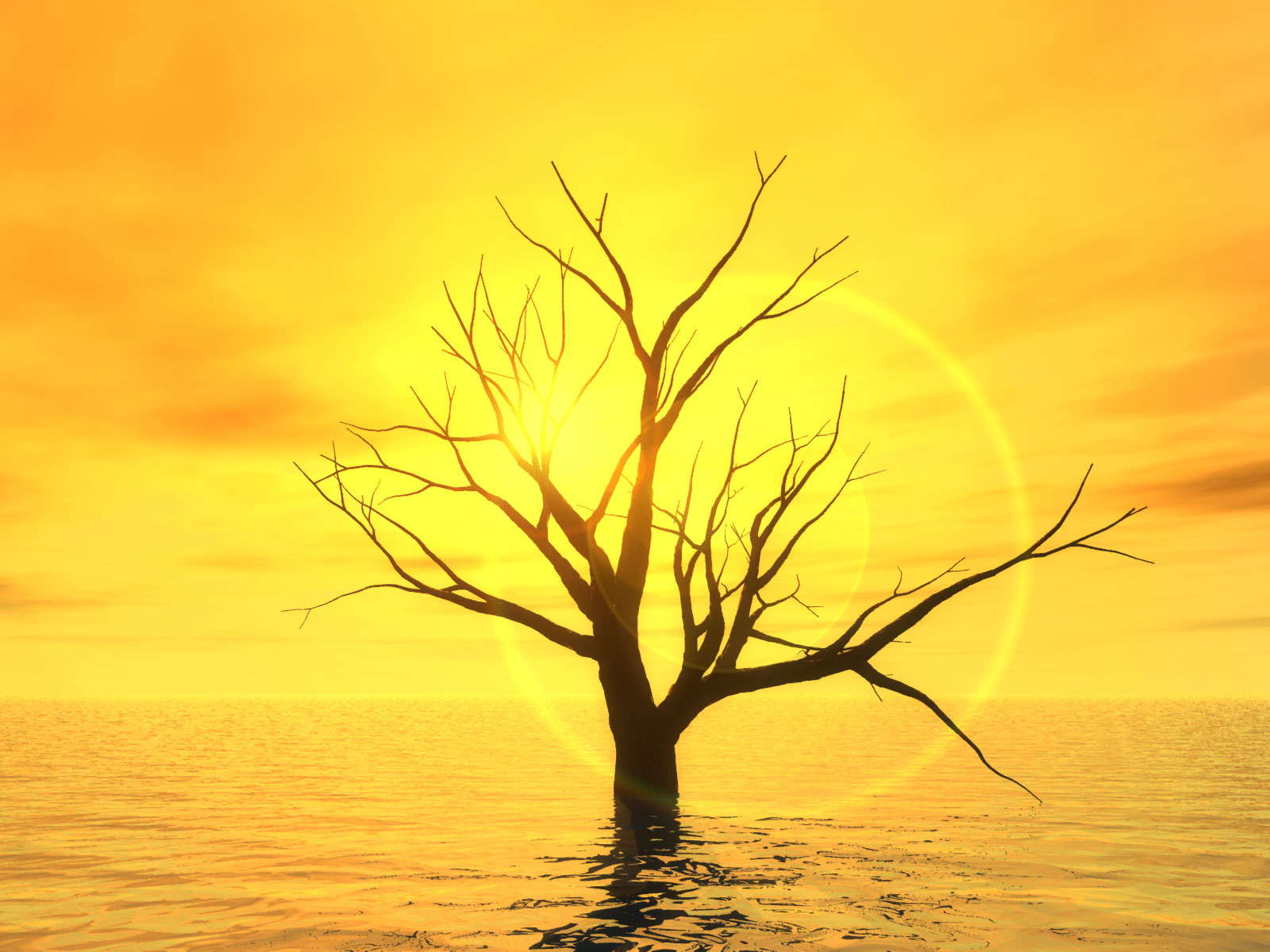 When I was heavily into Carrara rendering, I tried to make a version of this image using that program. However, I found that the fantastical nature of the image just didn't turn out very well in such a realism-minded program. I was afraid the same thing would be true with Vue (which is equally realism-minded), but the flexibility of the atmospherics model in Vue is such that I was able to achieve my unrealistic sunset with a modicum of tweaking. 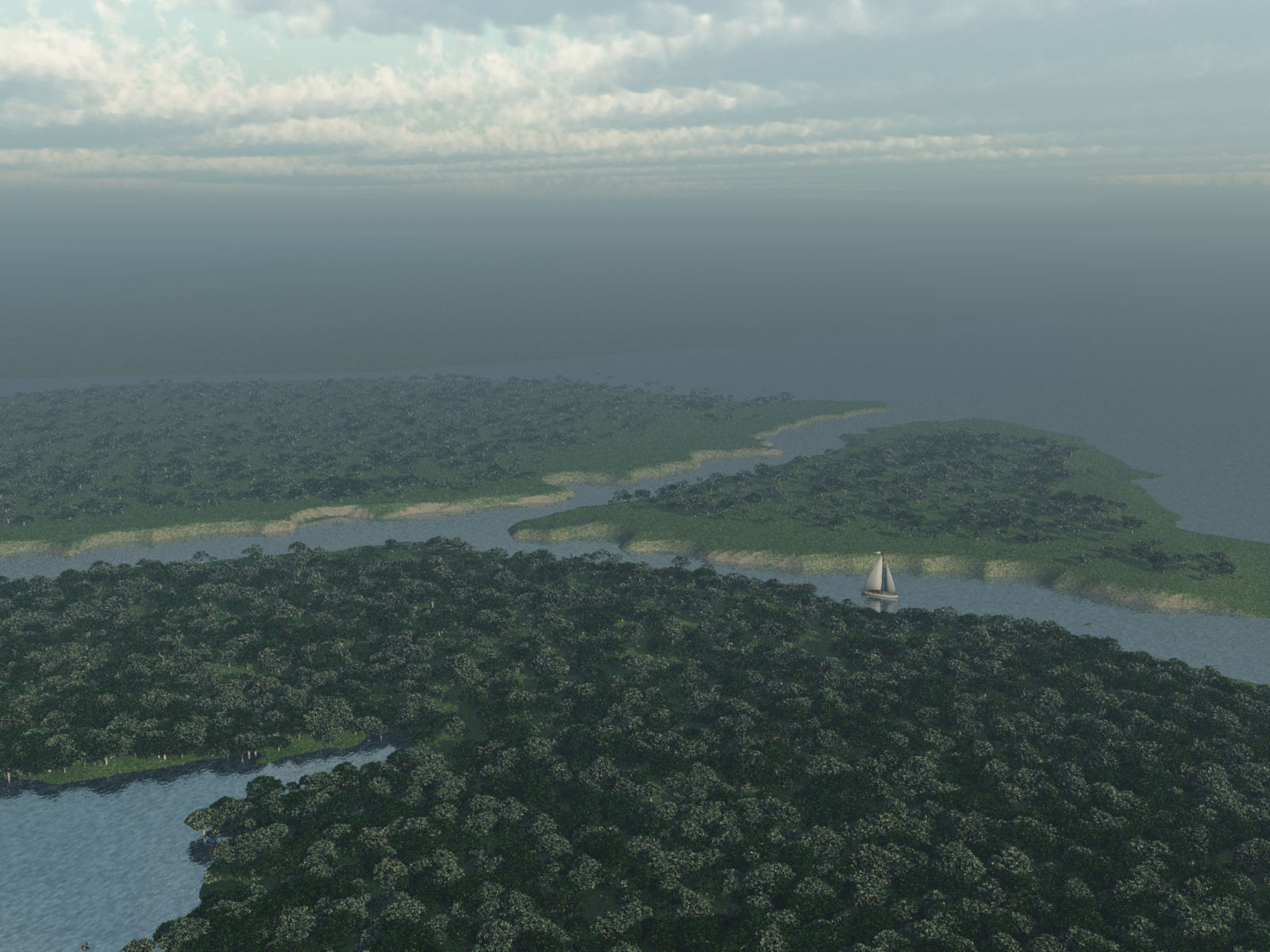 It's been a really long time (almost a decade, I think) since I last rendered a low-lying landscape from this height and perspective. I love this sort of view, but the challenge of realistically managing the horizon has always kept me sticking with more mountainous terrains (which I also love, of course). Finally, with Vue, I'm able to achieve the sort of effect I've been looking for all these years. This is one of my few renderings that someone has mistaken for a photograph at first glance.

The sailboat is a stock item from Carrara 6, imported into Vue. 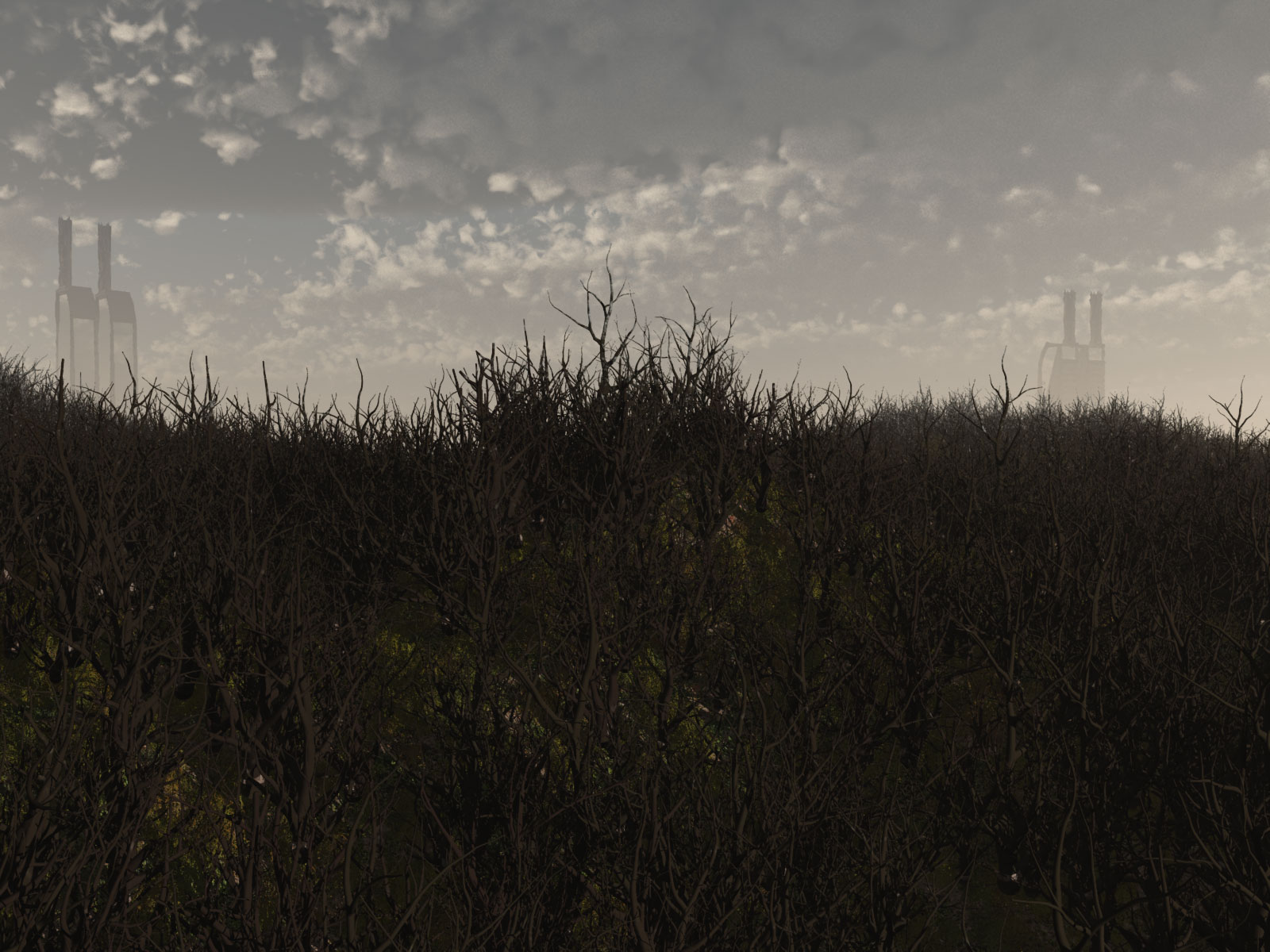 These are the first building models I've created myself in a while. Vue is able to import directly from Google SketchUp, and is able to do so in a manner that makes it easy for me to apply complex textures (which Carrara and Bryce both had trouble doing with SketchUp objects), so I imagine I'll be doing more such modeling from now on.

The twiggy brush in the foreground is also of my creation, based on a different solidgrowth tree in Vue. In general, I was very pleased with how dismally industrial I was able to make this scene. 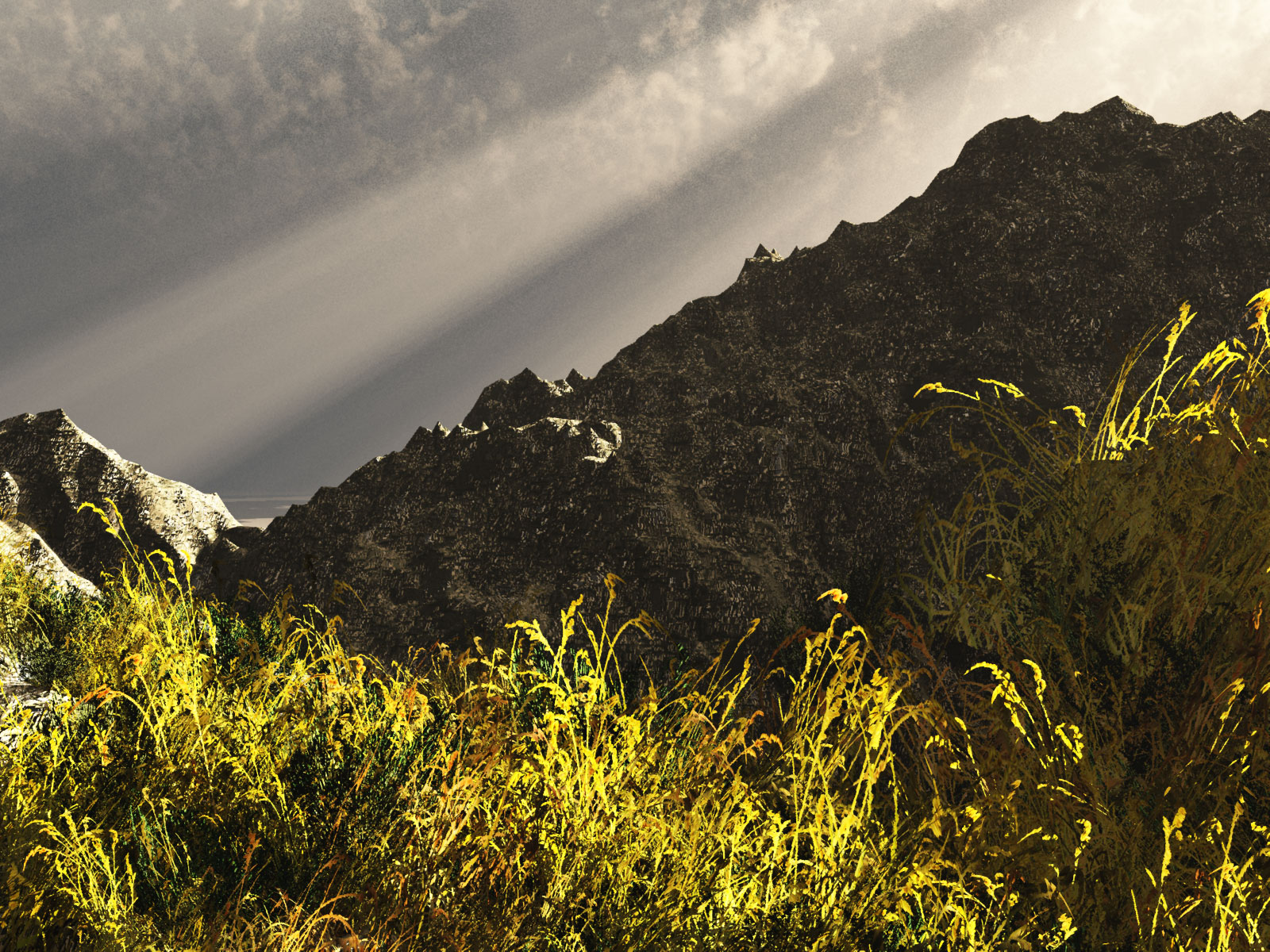 "God rays" are a favorite subject of mine in landscapes, and this image marks my first foray into that territory in Vue. I was also particularly pleased with how the crags of the mountain came out, along with how the foreground grasses add realism and perspective. 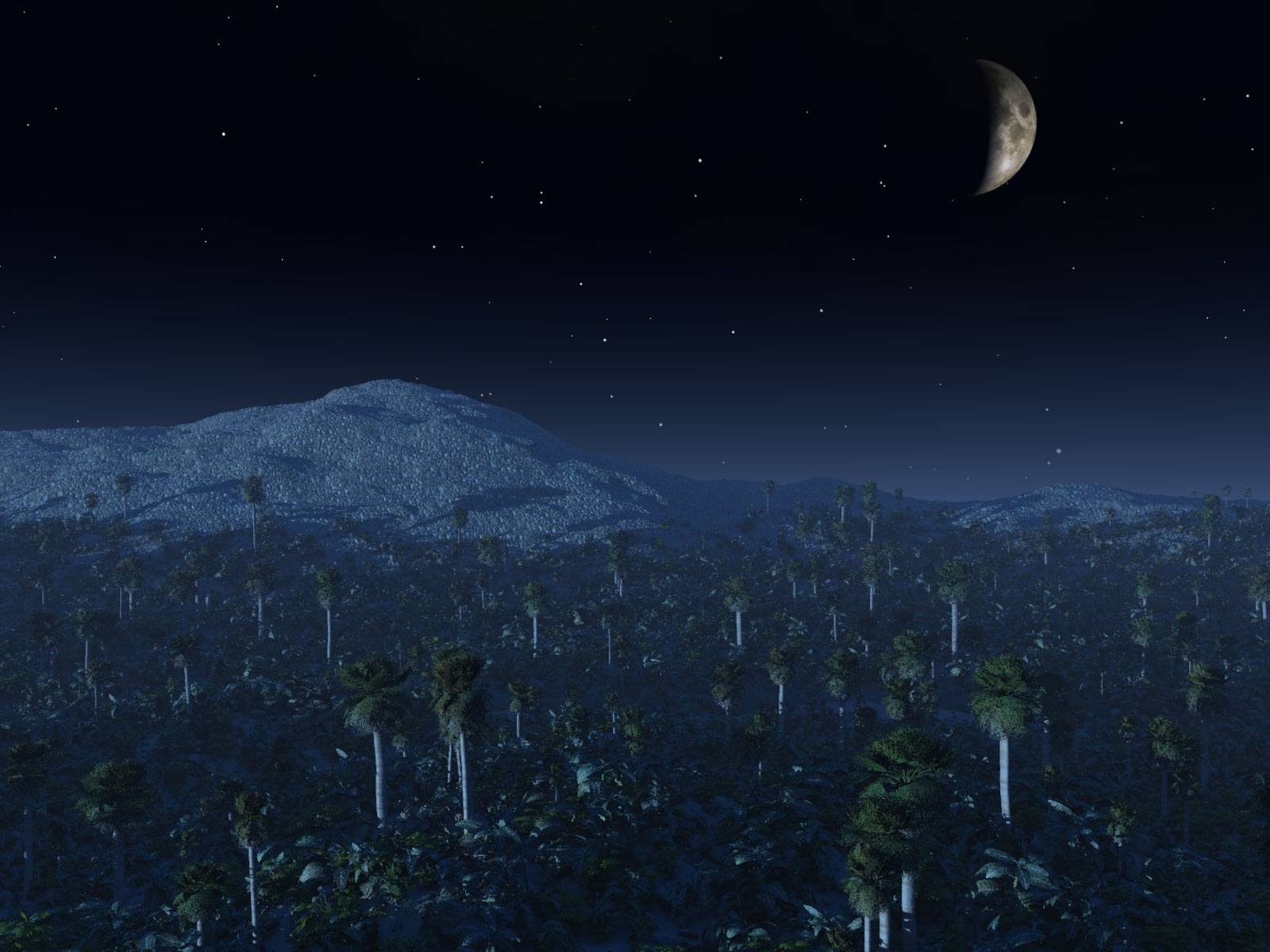 I love this one. In some ways it reminds me of the opening chapters of the Prince of Persia: Sands of Time game, but I designed it as a 3D re-imagining of Subcon, from Super Mario Bros 2 (one of my favorite games). I love the look of this one in any case, though, with its multi-layered ecosystems.

This is also the first night scene I've done in some time, because I was having a hard time making those look right in Carrara. It's actually more complicated to make night scenes in Vue (in Carrara and Bryce there is a simple toggle), but the end result can be much better. I imagine I'll be doing more of them. 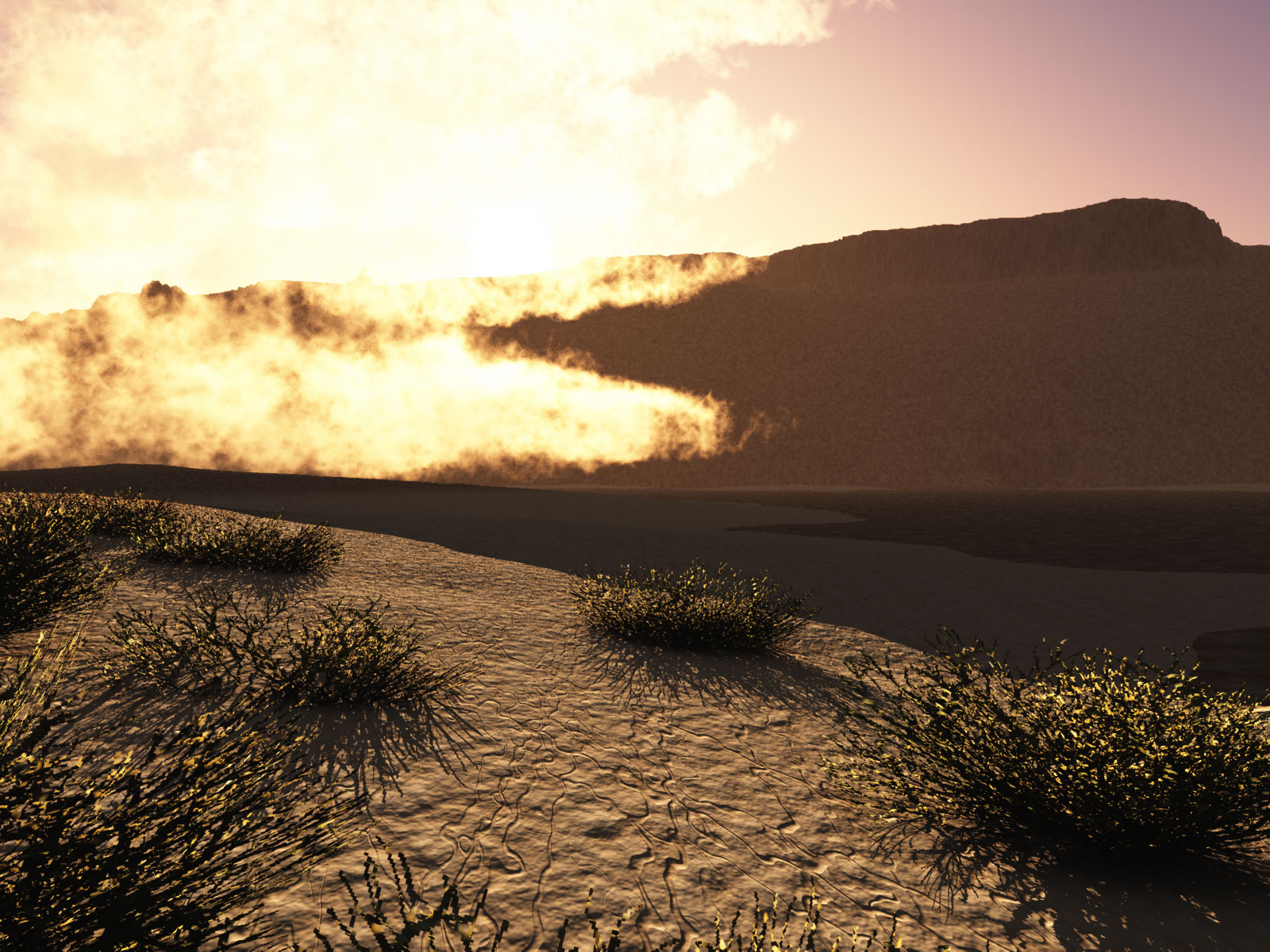 This was my second rendering in the full version of Vue. I wanted to see just how good the lighting and cloud effects could be -- the answer is "quite good," I think you'll agree.

One thing I really like here is how volumetric clouds are treated almost like meta blob objects (rather than simple bounding cubes). This allows for low-level clouds that look more organic, both by giving each component cloud a more realistic shape, but also by letting them "merge" together into larger clouds in a realistic manner. It's a little hard to explain if you aren't already familiar with this sort of thing, but let's just say that it lets artists model unusual natural phenomena more easily. 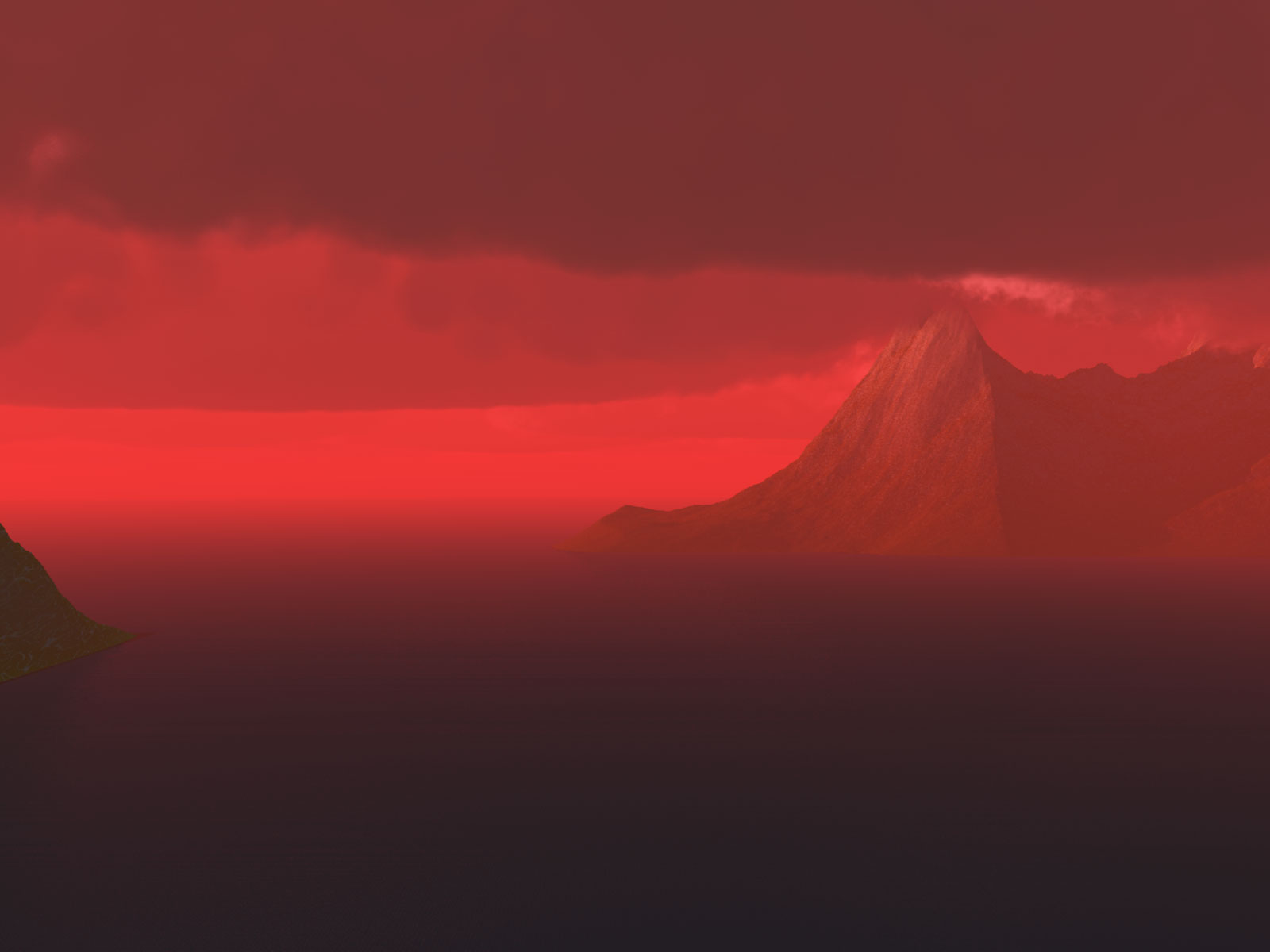 This is a re-envisioning of one of my favorite early renderings. 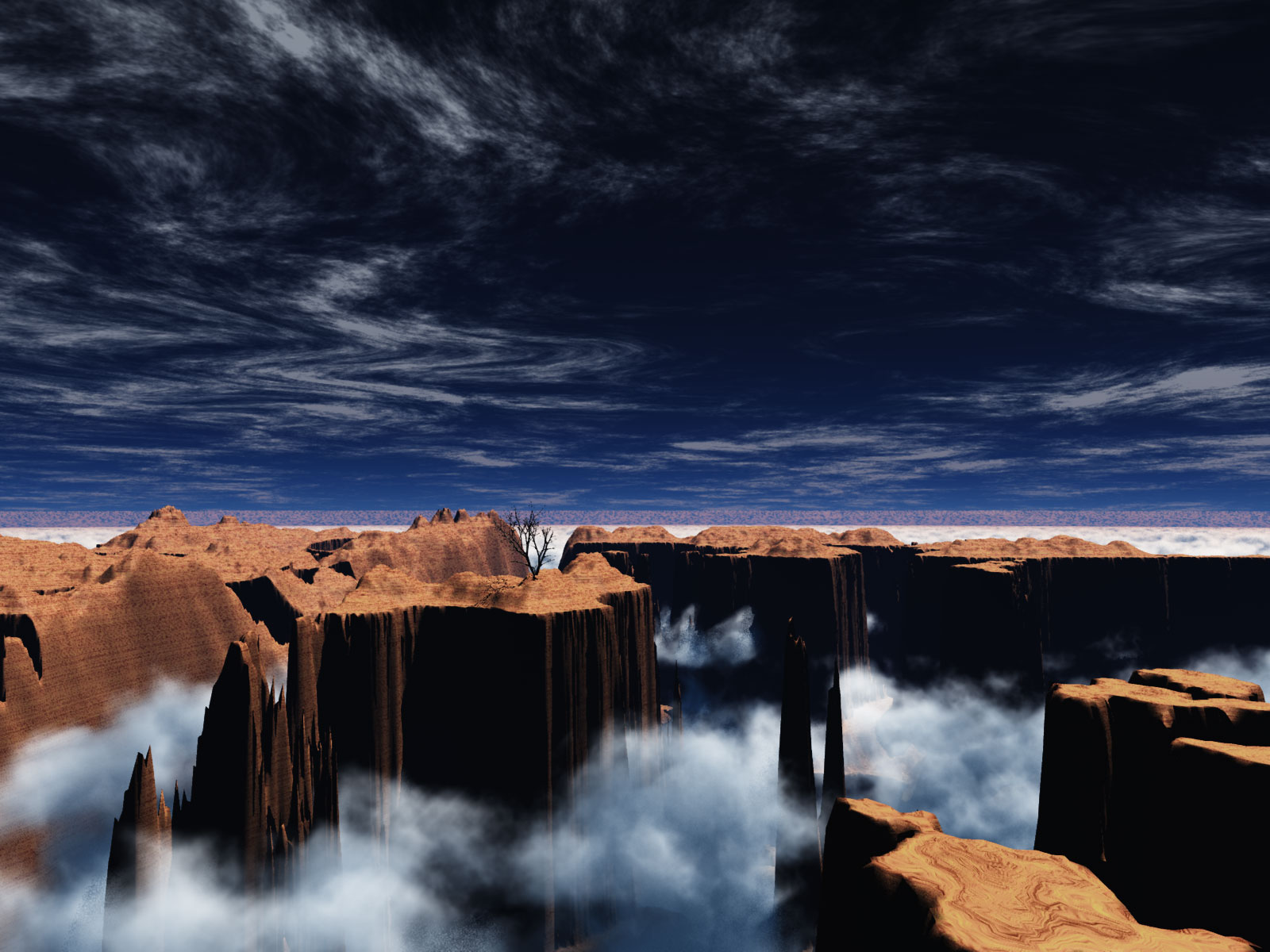 This one was unusually tricky to get right, and took me several more iterations than normal to get right. I'm pleased with the end result, except for the horizon line. 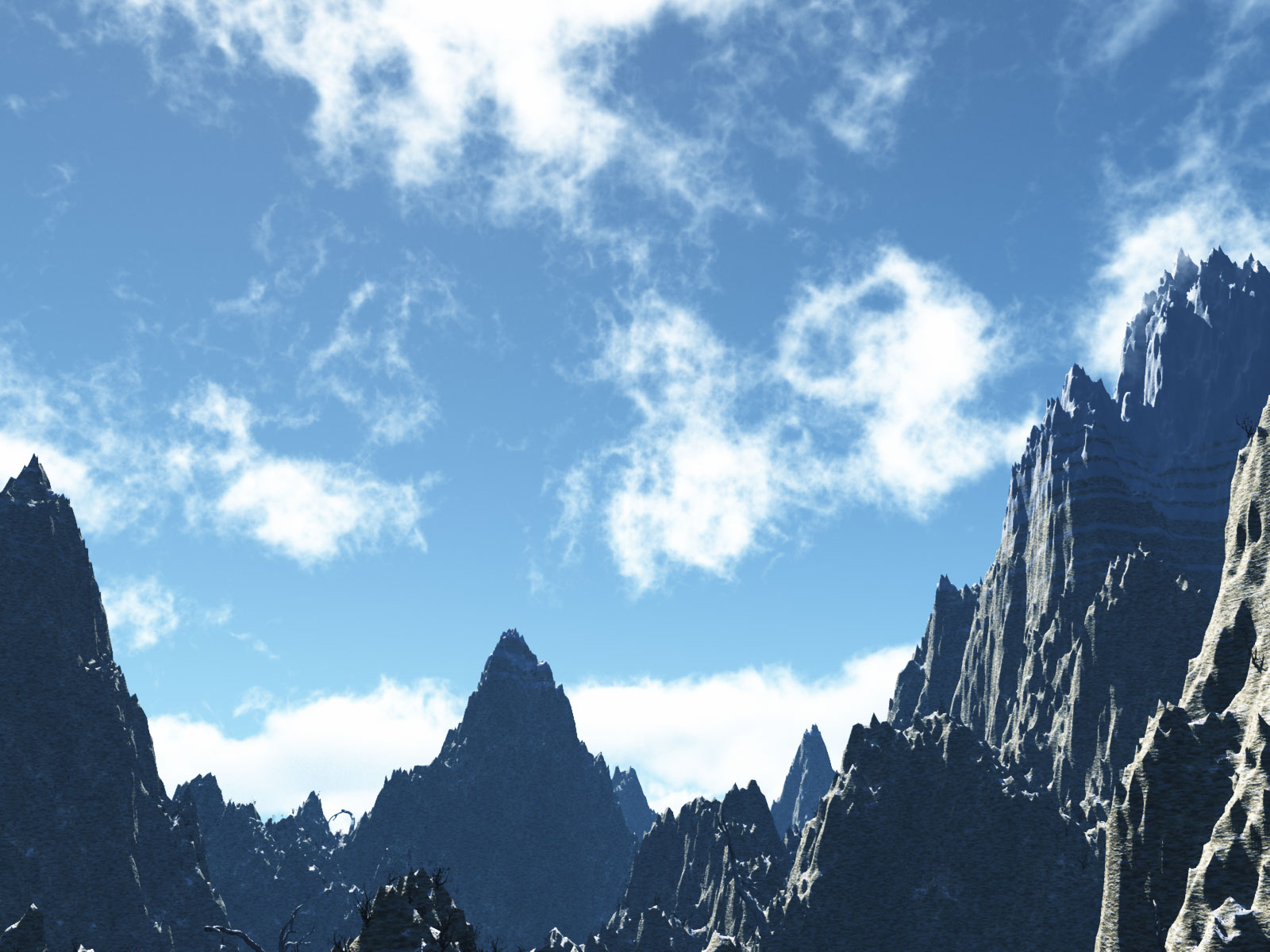 This is another one that took me forever to get right. In the end, the composition is completely different from what I had originally imagined, but I'm happy with it.

My first rendering in the full version of Vue. I was immediately floored by how realistic the "ecosystems" component is. These sorts of grasses and trees wouldn't be possible in any other rendering package. 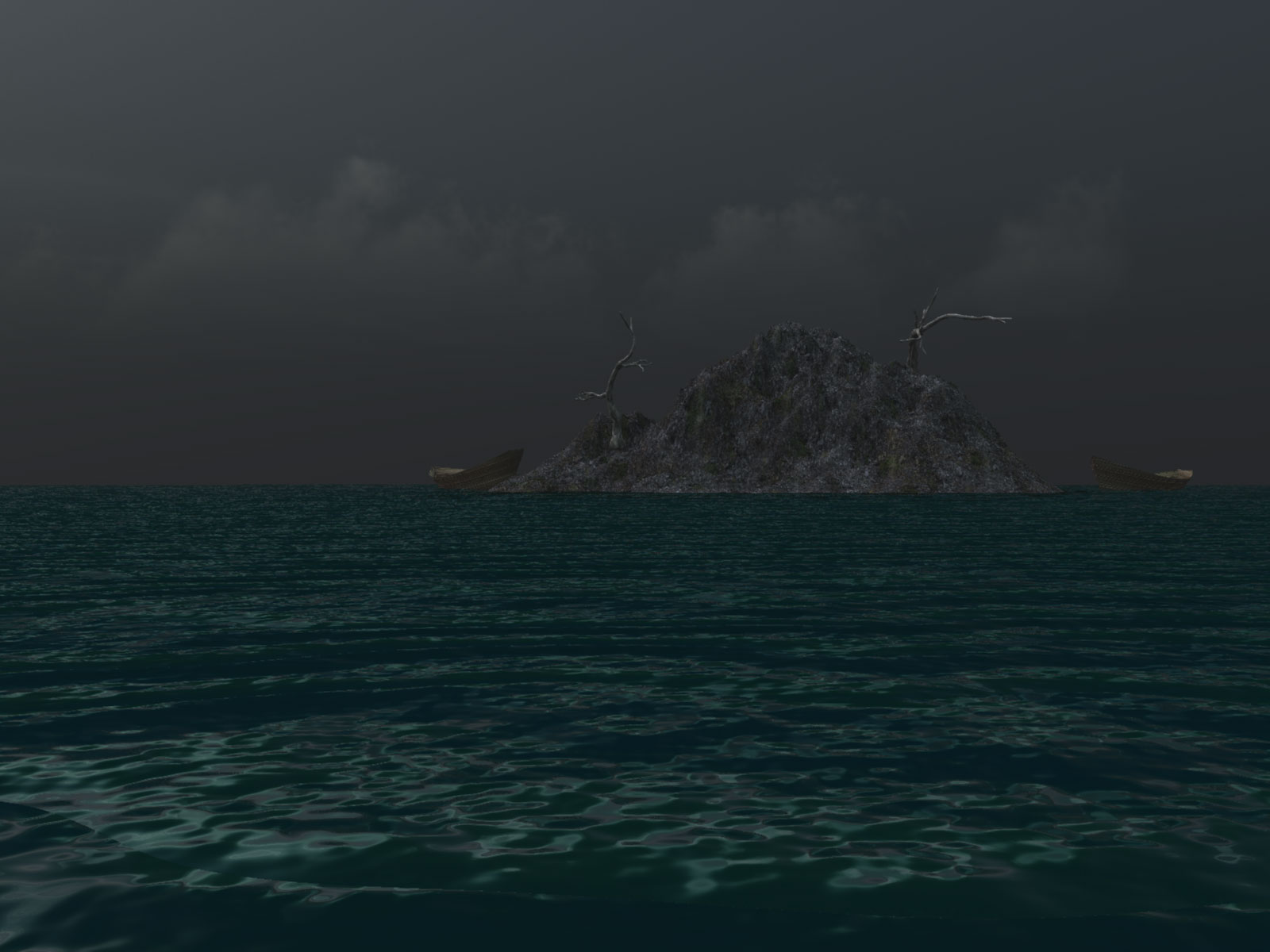 One of my moodiest pieces ever. I was particularly pleased with how the ocean waves turned out.
Posted by Christopher M. Park at 11:00 PM 4 comments: 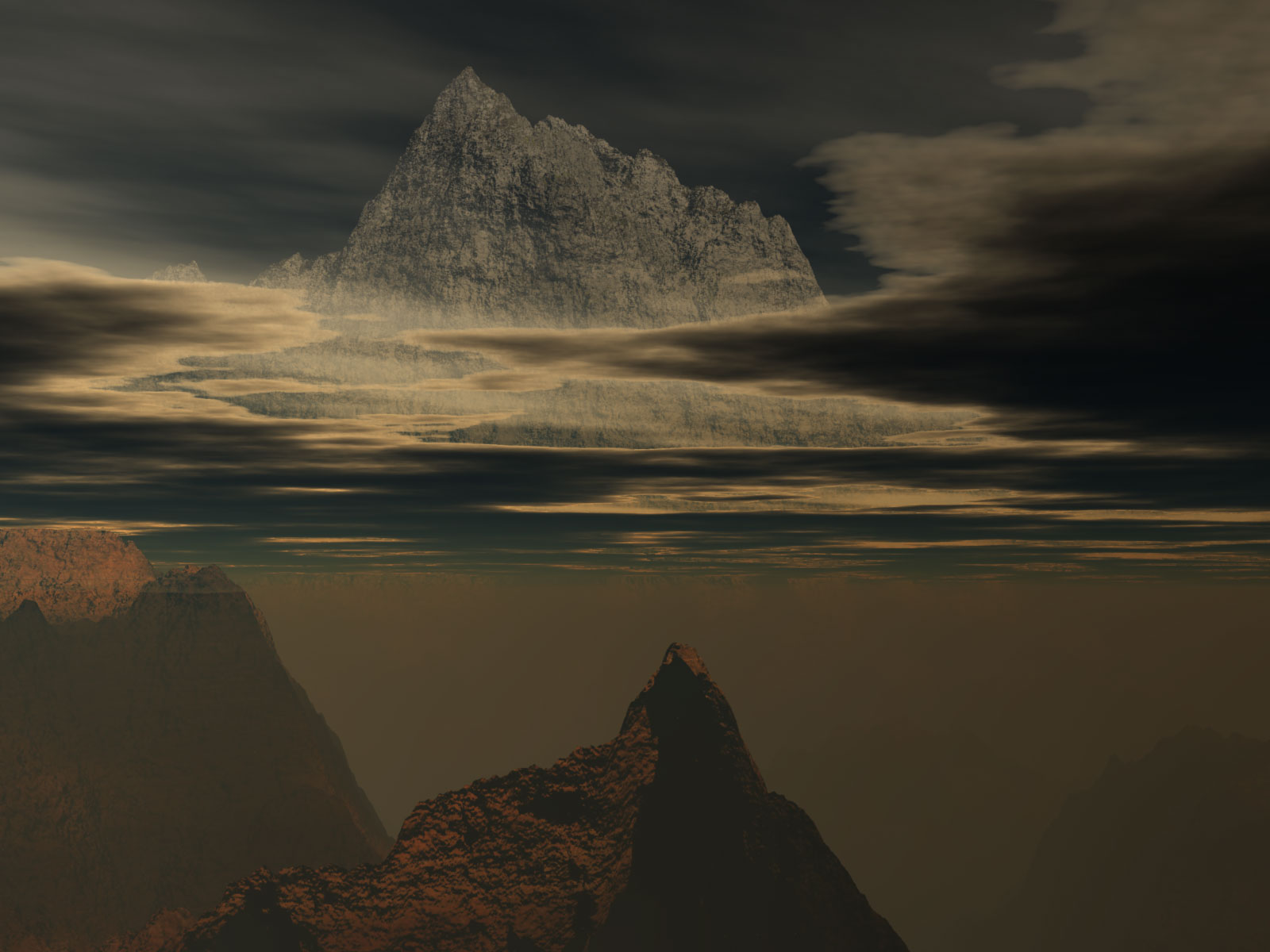 Purely an experiment in lighting and atmosphere, the end result is something I really like. I enjoy the contrast of the ruddy darkness beneath the clouds with the grayish light above them. This sort of duality is the sort of thing that occurs all the time in nature, if you think about it, but it's the sort of thing we are rarely able to see from ground level.
Posted by Christopher M. Park at 9:58 PM No comments: