The Last Federation is a really unique game in that it is a strategy/tactics game set inside a simulation game.  Check out our first sneak preview about it, or our preview discussing simulations in the game.  Also our recent podcast with Space Game Junkie with lots of other details, the description of your role as an independent agent in the solar system,  details on the alien races, information about the "butterfly effect" in the game, and the final scene art for all the alien races, some of the planetary art, and a written preview with info about combat.  Then we've got this first video of combat, info on the new combat GUI and other upcoming combat changes, and the intro story video.  Oh, and the forums for the game are filled with lots of other detailed tidbits, too.

Press about the game from RPS and PC Gamer.

Alpha Information! Private alpha testing with players is currently in progress, and we will be adding more players throughout the coming weeks leading up to release.  If you're interested in signing up, please see this forum post.  Right now we do have open spots still, but we may wind up needing to close signup past a certain point, because we definitely have a pretty huge list of people at this point (and there's only so much feedback we can process at any given time).

This is a very short post today, and it's just to share a very limited set of screenshots.  There are a bunch of other subscreens I'd like to show you, and the updated combat GUI as well, but it's very late and I'm very tired.  So you get this. ;)  I'll have a new video up of various parts of the game, including the grand strategy bits, either tomorrow or the next day.

You can click all of these for larger versions, by the way.

Here I am at the very start of a game, parked at the Andor homeworld (of this particular game).  You can see some info about it and about my status in the bottom there, and some buttons for me to interact with them and their planet.  There are also tabs visible there that let you get into much more nitty-gritty non-location-specific data.  On the right-hand side, you can see recent notifications about racial actions and location events.  It's just three minor political notes, and then the Andors starting to accelerate their population growth.  Everyone else is still trying to become spacefaring. 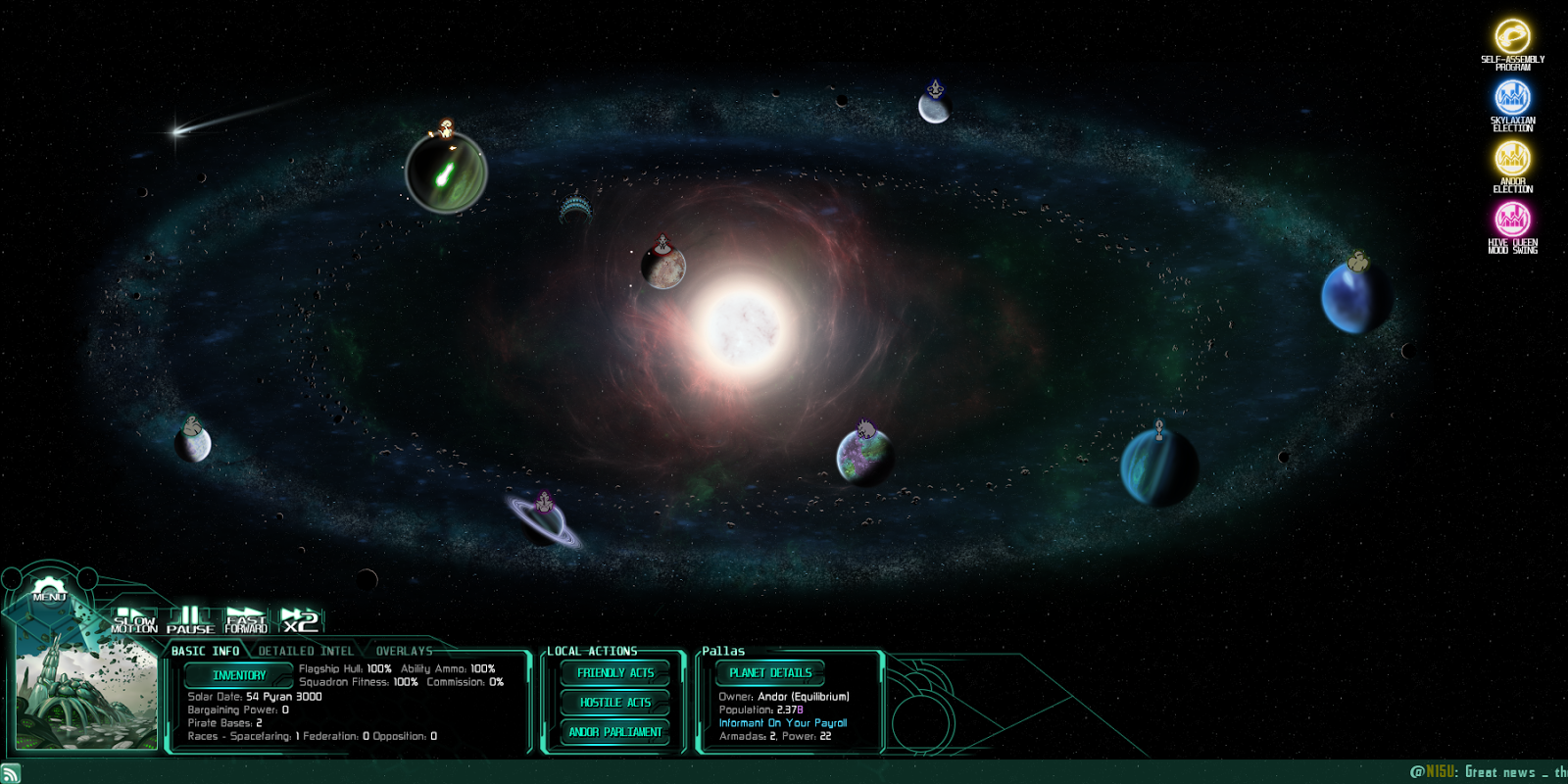 Skipping ahead... I'm not actually playing in this game, I'm just in observer mode watching to see what unfolds without my intervention.  Looks like the Burlusts and the Thoraxians are now spacefaring, and a lot more stuff has been happening recently.  You can see both some defensive armadas and some picket ones.  It looks wicked cool in motion, I look forward to showing you the video of the ship and satellite swarms. 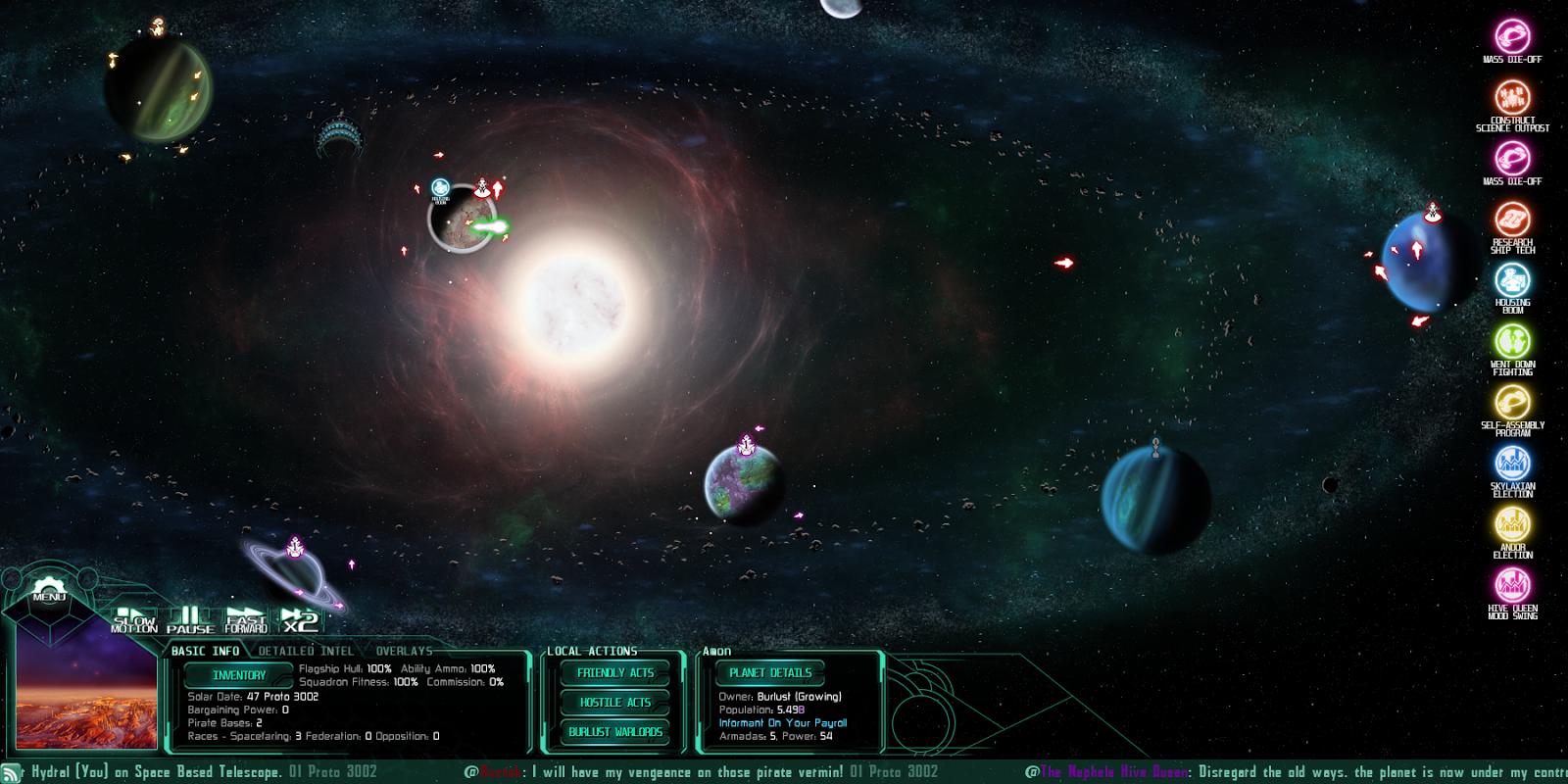 Okay, so actually here is one simple but useful subscreen screenshot for you.  This is the racial power grid, which basically shows how everyone (and pirates, but not you) is getting on.  Turns out, in general... not well.  The Burlusts have captured 6 of the 8 planets and have a Fear Empire up and running.  There are 10 pirate bases, mostly of races run off their homeworlds by the Burlusts, most likely.  I didn't hover to see, but it does tell you.

Interestingly, the other "most evil" race is the only other one that is surviving in this particular game.  The Thoraxians have a measly 2 armadas.  The thing is, they still have 11.7 billion citizens, all of whom count as soldiers.  That's true of the Burlusts as well, and heck they have almost 80 billion soldiers.  But it's basically Klingons versus the aliens from Alien.  Every time the Burlusts land on the Thoraxian homeworld, it's largely slaughter.  It's a good day to die, indeed.  But the Thoraxians are so weakened in space that they aren't going anywhere fast, either.  Without my intervention, my bet is that the Burlusts would wear them down eventually in some fashion.  With my intervention... hmm, I might could get the Thoraxians back into fighting form, or I might just get myself killed.  It would be really tough. 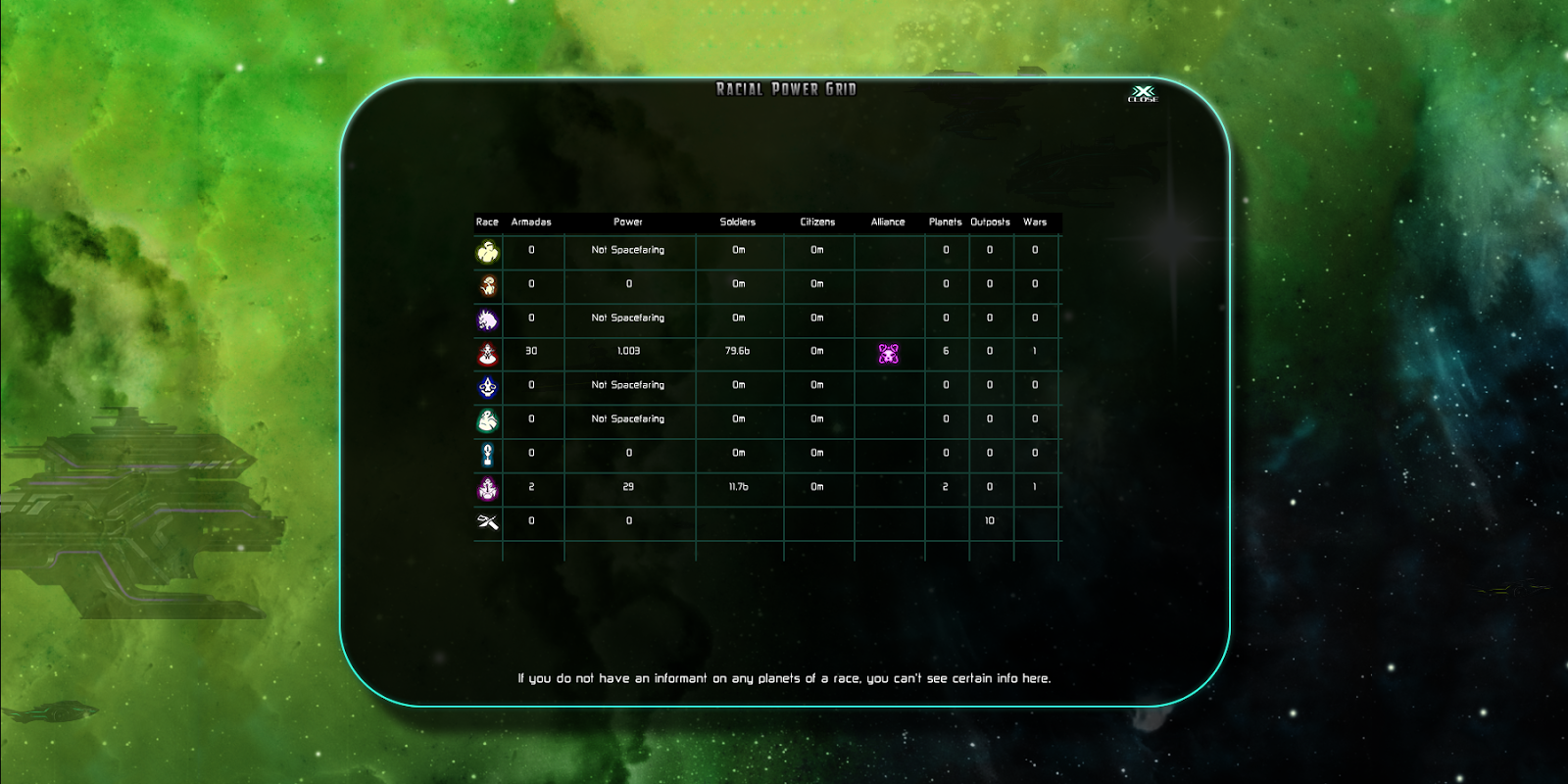 Right, so I reloaded a save from the start of that game, and it played out really differently.  This time the Thoraxians have a 5-planet Fear Empire, and the Burlusts have a very weak set of two planets.  I am not sure why the Thoraxians have not taken them out yet, as they are super aggressive.  The in-game graphs and logs would tell me, but I didn't look that closely into it.

More interestingly, the Andors in this one are really holding their own.  I didn't look at exact numbers, but you can see that not only are they holding a pretty sizeable defensive fleet there, but they were beating on somebody else (probably that Burlust planet near them) pretty recently, too.  They're too nice to capture planets, but that doesn't stop them from getting into big scuffles.

I could totally turn the tide of this.  Or at least have a good chance.  Go in, befriend the Andors, run some missions against the Thoraxians (hey, they're going to hate me anyway), get the Andors to help the Burlusts, help the Burlusts build up, use them to take over the Thoraxian planets while the Andors play rear guard and send ships and support, and on from there.  If I could survive the resultant Thoraxian assassins and internal Burlust wars long enough, I could probably pull that off.  It would be pretty grueling, but in a fun way. 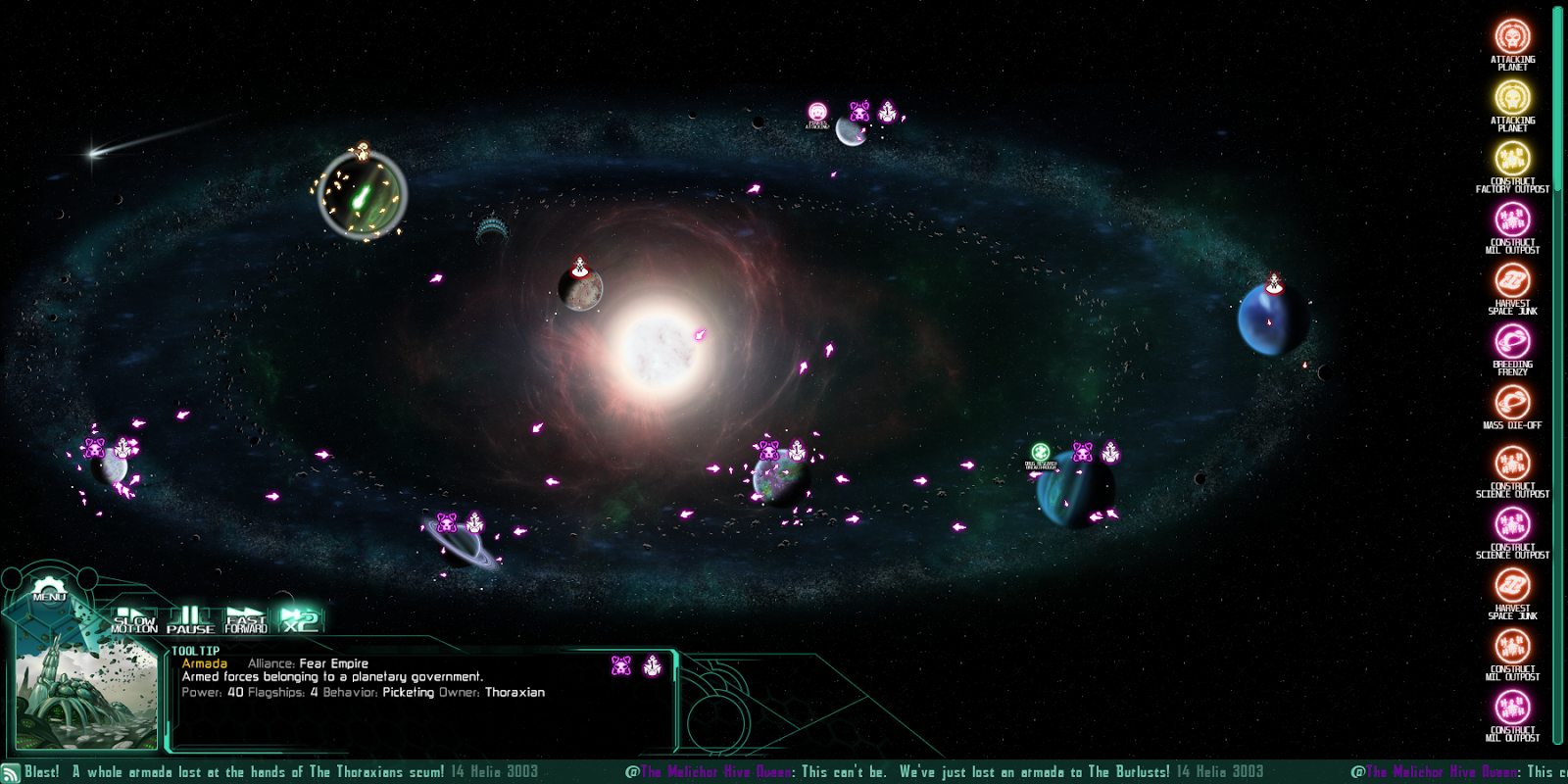 Oh, if you like graphs, here's one from the other day.  This one is showing the population lines for all the races over the course of a game.  As you can see, the Burlusts got a runaway start on this one, but the Acutiants were pretty neck-and-neck there for a while.  I easily could have turned the tide in favor of the Acutians before whatever that junction point was, if I had actually been playing rather than observing.

Also of interest, the Peltians have been slowly but steadily gaining population.  They're still way behind the Burlusts in this one, but between them and the Acutians I'm sure I could pull something off.  The Peltians are all about bombardment from orbit, and the Acutians might just hate the Burlusts enough to pull out a planetcracker or two if I give them the opening. 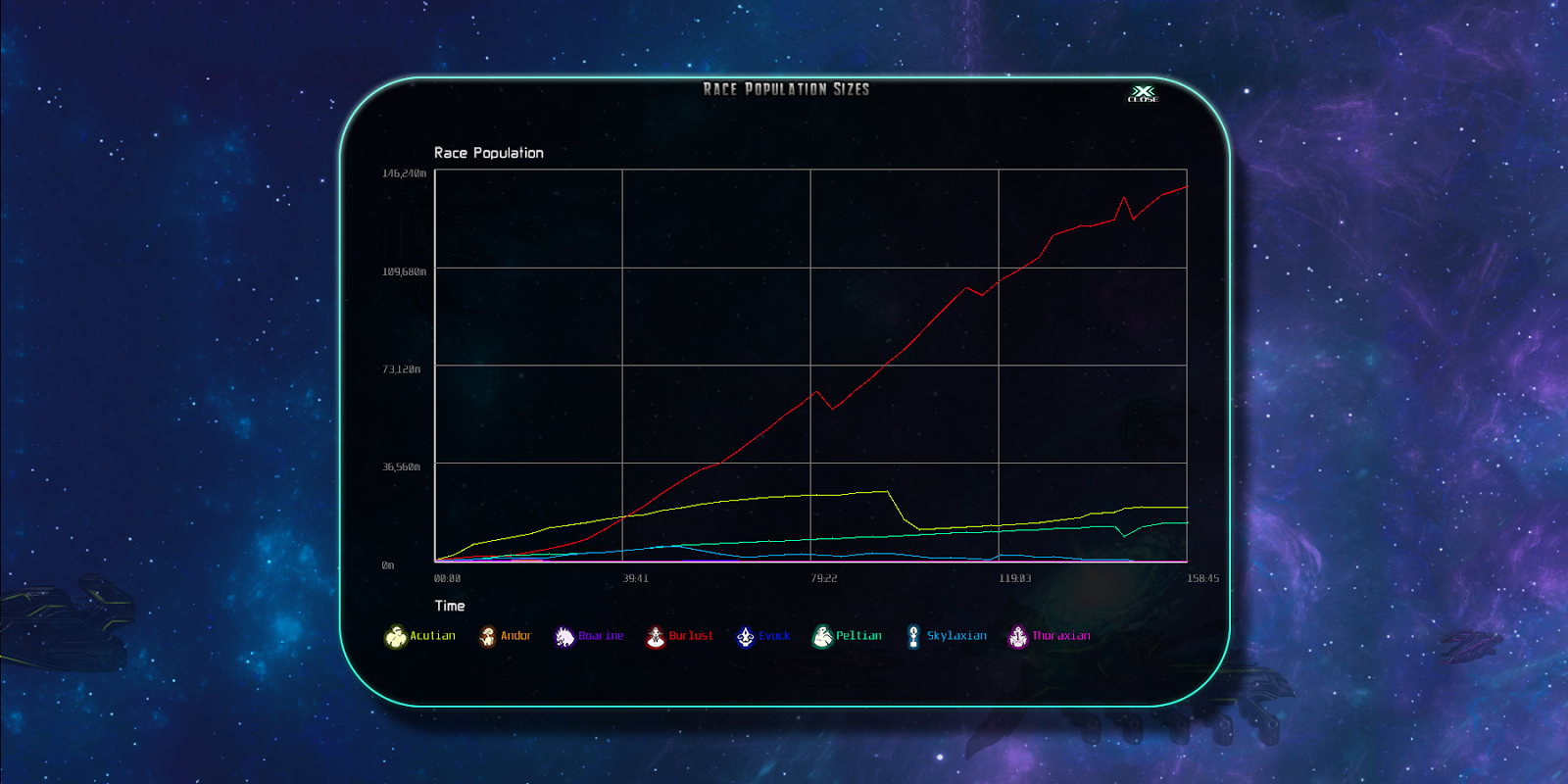 I had a crazy screenshot where the Peltians had taken over most of the solar system and were absolutely swarming everywhere (these are the little barn-owl communist Ewok-like guys, remember), just wrecking the whole solar system.  That happened I think three games in a row, so it was pretty interesting seeing the most innocent race form several Fear Empires, heh.


Of course, all of that is just the surface story.  As you can glean from the sidebar of the event and actions that are happening, plus the "chatter" scrolling across the bottom of these screens, a lot more is going on behind the scenes, and you normally would be paying attention to that as you play.  Using all those things to inform your own strategic and tactical choices, of course.

Okay, whew, that was longer than I intended.  Now it's really late!  But I'm very excited to be able to share this stuff with you, at any rate.  Enjoy!
Posted by Christopher M. Park at 1:38 AM

The observer mode is going to be available to players, right...? Because I, and certainly other people, would love to just get in the game and watch it, do nothing else but look at the little universe unfold.

Oh yeah! It's right there in the Advanced Start options, so no worries. :)