Planetary Art For The Last Federation, Plus News On Combat

The Last Federation is a really unique game in that it is a strategy/tactics game set inside a simulation game.  Check out our first sneak preview about it, or our preview discussing simulations in the game.  Also our recent podcast with Space Game Junkie with lots of other details, the description of your role as an independent agent in the solar system,  details on the alien races, information about the "butterfly effect" in the game, and the final scene art for all the alien races.  Oh, and the forums for the game are filled with lots of other detailed tidbits, too.

Hey folks!  I can't believe it's been almost a month since my last blog post -- sorry about that.  The holidays happened, and then we've just been incredibly busy with the game.  At this point we're about 5-6 weeks out out from the 1.0 release of the game, and 1-2 weeks out from the private alpha.  I posted some news about that on the forum late last week.

Planetary Scene Art
First off, here's some art!  These are small-scale versions of the larger planet-scene art that you see in various contexts in the game, mainly when you are looking at the details of a planet, at the planet's market, taking contracts at a planet, etc.

These scenes really help to give you a sense of place with each planet, I feel like, rather than just having the planets be a tiny icon and then all those other screens just be bland menus.  Same general idea as the scenes for dealing with the alien races politically.  There are 11 planet types in all, falling into 4 zones in the solar system -- inner system, habitable zone, outer system, and ice belt.  There is also an asteroid belt where pirates tend to live, and where there are various other space installations.  There are two images for each planet -- one that is more distant, from orbit, and one that is on the ground in one of the cities on that planet.  Here are some examples: 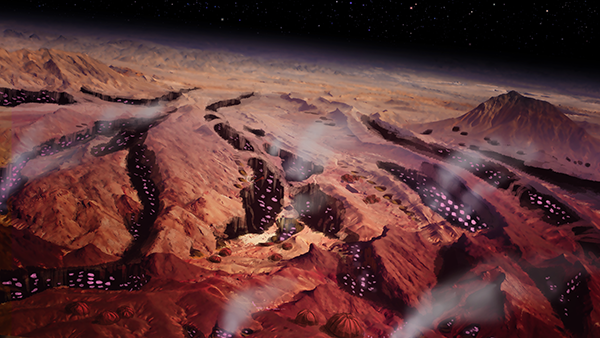 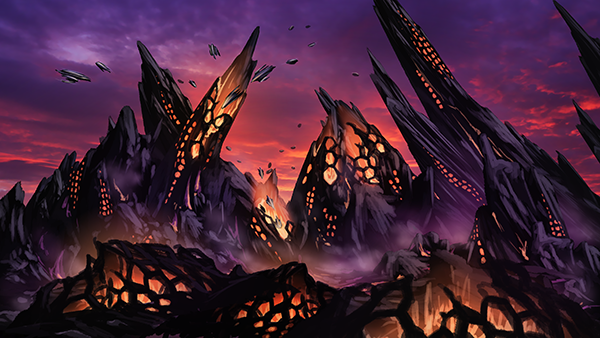 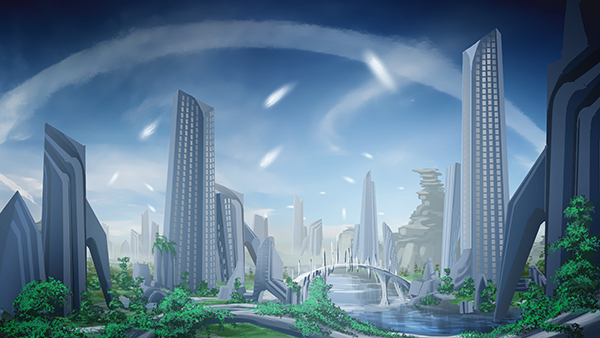 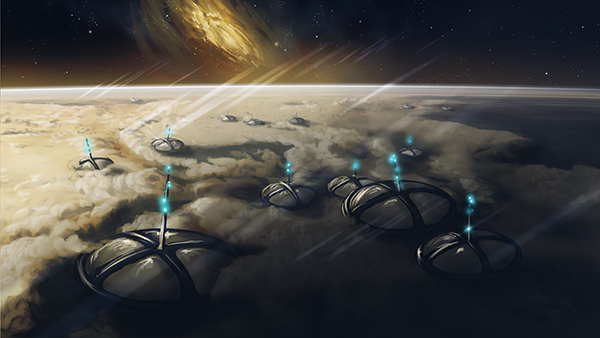 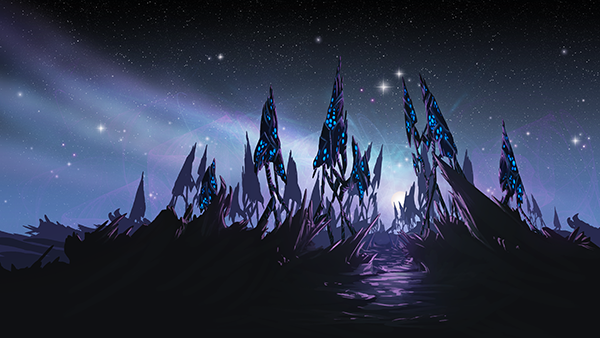 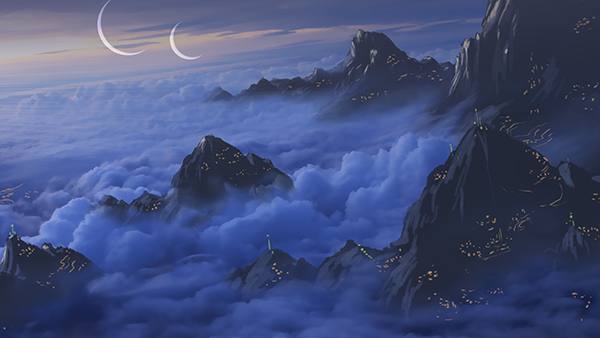 Combat Mechanics
Combat is one of those things that we have yet to show, and I had hoped to be able to share some videos of that with you early this week or even late last week.  Unfortunately that is not quite yet to be.  This game is one of two parts, and always has been -- the overall simulation and politics/contracts/etc model, and then the combat.

The idea is for them to mesh as well as possible, and essentially be seen as one coherent thing, not two distinct things that you switch back and forth between.  Kind of like how in AI War there are lots of grand strategy bits and some tower defense bits, but those really just mesh into the overall RTS nature of the game.

There were a number of problems with the combat model we were using up until recently, and the meshing of the two parts of the game was one of them.  The other combat model just wasn't as fun as we'd hoped it would be, and it wound up being a bit too twitch-based to fit well with the more contemplative larger model.  The single-combat ship vs ship model was also something a lot of folks on our forums were skeptical of, and in the end they were right.

Ultimately what we are doing now is shifting to multi-ship combat, in a more RTS style of gameplay for the combat itself.  It's amazing how right the new concepts feel in terms of just giving a more visceral feel to the combat, and something that is more connected and logical to the overall scope of the game.  I think you'll really like it, and it fits right in with some things that Arcen is known for doing really well, so that's always a plus, too.

The bad news on that front is that means we can't really show you any video or screenshots for another week or so when it comes to those parts.  Overall screenshots have been really thin on the ground so far because we're still working on the visuals for the GUIs all over the place.  We learned with Valley 1 that if we show working screenshots with temporary art too soon, then those wind up getting plastered all over the Internet and criticized.  So you'll be seeing near-final screenshots and art only -- and soon!