Thought it was about time for a general update on our upcoming game Shattered Haven!

Art Evolution
For Shattered Haven, you may recall that Heavy Cat Multimedia is doing all-new pixel art for this game just as they are doing all-new higher-res art for AVWW.  Both projects are going really well, although we've been so hard at work on both of them that we've not really had time to stop and share much yet.

Here's how that is proceeding so far, although there are still not-yet-updated bits even in the most recent version all the way at the bottom -- so these are definitely WIP images!  The first image is from before Heavy Cat got involved at all, and the most recent one at the bottom was taken about 5 minutes prior to my writing this. 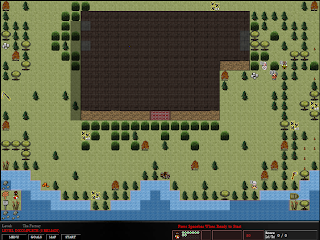 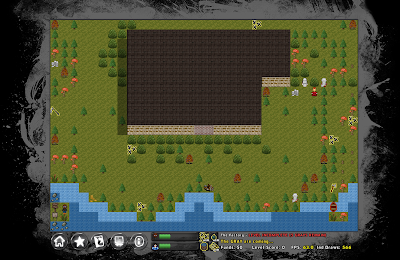 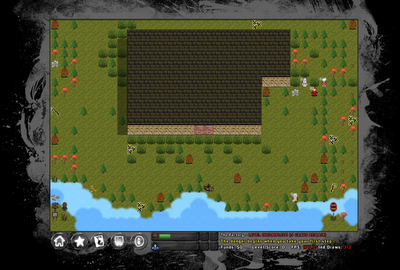 The thing I'm most proud of out of the recent screenshot is the new organically-shaped water.  It's a lot more natural than just the pure squared-off tiles, and that's something I really like.  It took me literally all day Friday to get it to work, as the various approaches that I and Heavy Cat had tried were not working and I had to think of something new.  Now of course I'm still going through the collision ramifications of that and adjusting code to work with the completed visuals for the water, but that's winding down thankfully.

A New Team Member
An old friend of mine, Zack Cataldo, has joined the team to help with level design, story, and general game design tweaks.  Zack and Lars and I go way back together, knowing each other from the primordial Internet days of 1998 or 1999 or so.  All of us were hobbyist game developers together, and then we all wound up moving into business software development instead of games.

Then of course I founded Arcen, and a while later Lars and I worked on Tidalis together (the brilliant core design there was his).  Zack is one of the best adventure level designers I've ever seen, and so I'm really excited to see him on this project -- he's been working on it for about 5 weeks now, part-time in his after-the-day-job-and-after-family-time slice of life.

Speaking of, back in 2008 or so Lars was enormously helpful to me in refining the Shattered Haven design and mechanics.  So this is another game where his hand is definitely visibly felt.  When he heard the news that we were revisiting that game to complete it and release it this fall, he said "Oh, good, I've been hoping you'd come back to that!"

Story Evolution (Very Minor Spoilers)
Zack and Erik and I have been meeting once or twice a week for the last 5 weeks or so on Skype to have writing session calls, and the results have been really amazing.  I've never worked in a group to write/plot/plan like this before, but I've of course worked that way for game and software design many times.  I find it refreshingly similar of a process.

The original story for Shattered Haven was based on a novel that I had written about 1/3 of but then never could finish.  So I'd set up the world-building and the Grays and all that, but the actual storyline that was moving through that world was both incomplete and a little weak.  Hence my setting the novel aside in late 2007.  Still, it was a cool premise, and the main thing was that I didn't know where to go with it after about the first third or so.

Compounding problems for the game version of that story back in 2008, the story of the novel really didn't lend itself well to being an interactive game of this particular sort.  So I had done kind of a half-baked version of the novel story that was way worse, and introduced a lot of new characters and so forth.  My focus was on the gameplay and the environmental-style puzzles, and that was what really shone.

So what Zack and Erik and I have been doing is working on making a new and improved version of the story that would suit the game better.  To be honest I wasn't expecting all that much, because writing for games is particularly hard and the results aren't usually that stellar.  However, all of my favorite games tell tight and compelling stories: Final Fantasy VI, Silent Hill 2, Chrono Trigger, and so on.

As it turns out, writing in a group has been one of the best things to happen to this game.  Zack and Erik have both been just full of slam-dunk ideas, and their ideas have spurred me on to have new and exciting ideas, too.

There are 13 major overworld areas to the game, and 8 different endings that you can get, and we've been making good headway.  At this point we have the entire intro all planned out and partially written (and Zack is partway through the level design on the new intro, too), as well as having the first of the overworld areas complete in terms of its main story arc.  We've also got the broad outline for the entire story, as well as the generalities of all 8 endings, as well as the details of all of the principal characters and villains.

It's very exciting progress, and I'm really jazzed to see us so far along.  We're expecting to have all of the rest of the detailed plotting done by the end of September.

Evolution Of The Villains (Somewhat More Material Spoilers, But Still Not Bad)
Remember this image from the main menu of the game?  Turns out the composition of it is even more significant than we realized at the time I commissioned it from Heavy Cat (it's not an actual scene from the story, it's just more of a thematic montage showing the major characters all together). 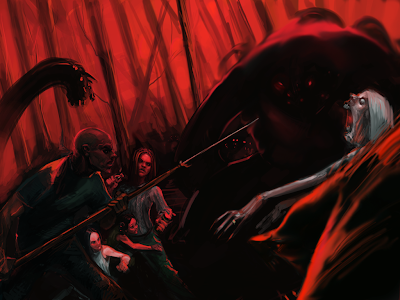 Darrell and Mary Williams are the two adults and are the main characters.  Mary Williams and the boy Pierce are also playable characters briefly at the start of the game, but mostly they are the object of the parents' quest: saving the kids is the end goal.  And no, there are not escort missions, as a few people had worried about the last time we did a big update that showed this image!

At any rate, you can see that the family is beset by a variety of monsters here.  Originally when I was writing the novel, there was one squid-like monster that was going to be sort of a running villain, but mainly the novel was more about the survivors vs the world.  And bear in mind this isn't your typical zombie apocalypse -- the Grays are zombie-like, but are different in many significant ways that you'll discover throughout the game.

Anyway, no villain!?  That's not that compelling to me, and I suspect to many people.  So the squid-like monster was taking on more of an important role in the story of the game.  If you look on the left side of the main menu image, you can see one of its hooked tentacles reaching up over the family.

For a while the squid seemed to be enough, and Erik and Zack and I were running with that.  It wasn't too long before we had come up with a Gray that we refer to half-jokingly as "zombie mom," though, and you can see her on the right-hand side of the main menu.  Exactly what is going on with her is one of the chief mysteries of the game.  And actually that's true of the squid, too.

But a third villain who was just a minor (yet terrifying) monster in the game suddenly leapt into prominence during this past weekend's writing sessions: the shadow man.  You can see him hulking over both zombie mom and the family on the right-hand side of the screen.  The shadow man was always in the game, and hence why I asked for him to be given that sort of place on the main menu that heavy cat did.  However, he wasn't really a major story figure before... and yet now the story has evolved so I can hardly imagine what the story would be without him.

So now we've got a stable of three major villains that are set against both the family as well as, in many cases, each other.  Each of the villains has their own initially-inscrutable but eventually-explained motivations that make perfect sense in the context of the story while being mysteries that I don't think most people will figure out in advance.  This is one of the things that has resulted from our writing sessions that I'm definitely most pleased about!

Evolution Of Cutscene Methods
All the way back in 2008, I had created an in-game cutscene engine based on a simple scripting language I created.  That's really useful for doing most of the small little exchanges and happenings, and it really can help make the world feel more alive.  That's something we're still using a ton, but since seeing the awesome main menu that Heavy Cat did, we've also realized that we now have a new tool in our toolkit: comic panels.

For key scenes in the game that are particularly important or emotional or whatever, we're using these comic panels to give you a more dramatic view of what is happening.  The main menu is a good example of what their style will be, although the main menu is larger (it's 1024x768, whereas all the comic panels for in-game are 500x500).  Overall it looks like we'll have at least 32 comic panels, and more likely that we'll have 46 of them so that there are enough for the ongoing story as well as each of the 8 endings.

I won't show any of the ones that are related to the actual story bits, but we're also using the comic panels to introduce each of the 13 areas of the overworld.  That gives a really cool view of each of the areas that makes them feel much more like a real place than just seeing them with the more roguelike-looking graphics.  These are from some of the earlier areas in the game: 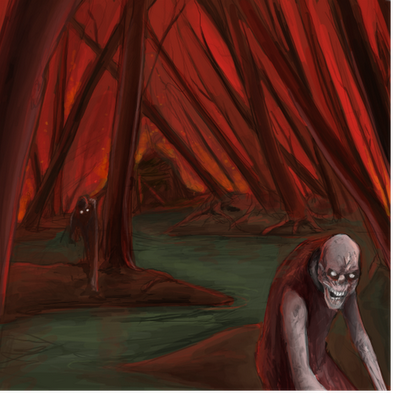 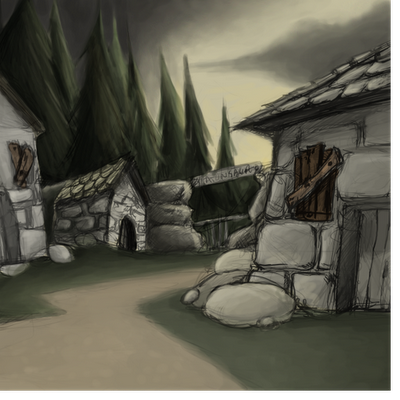 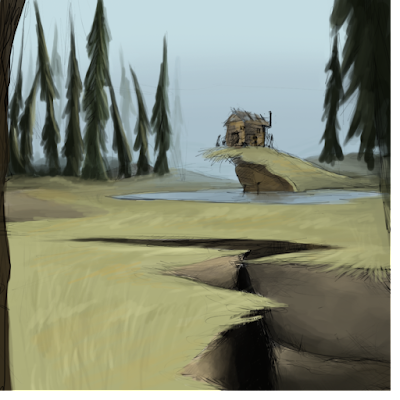 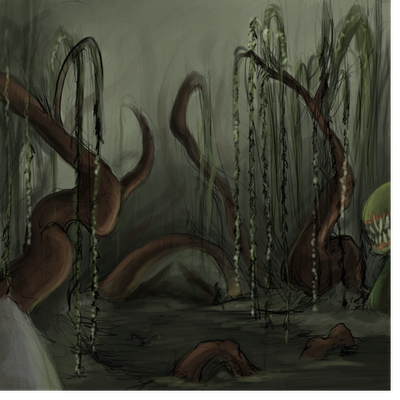 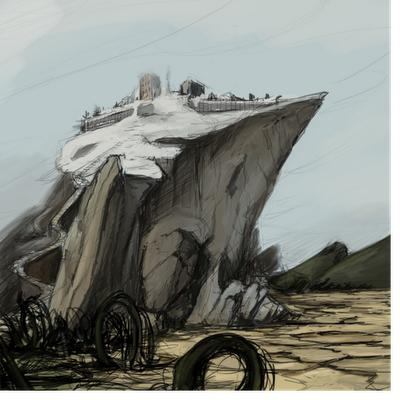 Evolution Of... The Timeline For Beta
So, we'd planned on doing a beta for this game by the end of September, right?  Well, with all the growth in the game, we're really trying to make sure that everything is in a really great state before we even start the beta.

Not all of the levels or parts of the overworld will be included in the beta initially anyway (extra regions will be coming out one or two at a time during beta).  And the same with the endings coming out during beta.

However, for beta what we really want to have is the first few hours of the game there in just a super-awesome state.  First 4ish overworld regions out of 13 at the least, I think.  And we want everything in general to be as polished as we can make it right from the start, as well as including all the new art from Heavy Cat and no placeholder art, and so forth.

With that in mind, I think we're about 4 weeks out from when we'd want to start beta at this point.  That would then leave us another 4 weeks or so before we actually hit 1.0 for the game (this is a really mature game already, with so much development history behind it).  Anyhow, so the beta will likely be hitting around the same time the Ancient Shadows expansion is coming out of beta and arriving on Steam, etc.

Sorry for the delay, but I figured I'd give you an extra-meaty status update on what we're doing by way of apology. ;)  Once the last of the placeholder art is gone from a few levels at least, I'll be sure to share a gameplay video so that you can actually see how the gameplay works.  The one main thing that wasn't even discussed at all in this post!